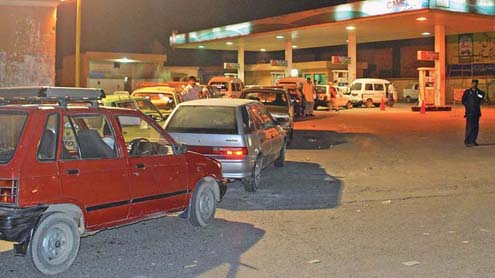 ISLAMABAD: Pointing its fingers at the Islamabad High Court for the ongoing gas crisis in the country, particularly in Punjab, the government on Friday said it would challenge in the Supreme Court an IHC judgment which had allowed reopening of CNG stations.

At a news conference, the Minister for Petroleum and Natural Resources, Shahid Khaqan Abbasi, said that there had been a serious gas crisis in the country over the past three weeks due to severe winter and resultant higher demand and a decision of the IHC to restore gas supply to CNG stations.

He said this year gas demand was 30 per cent higher than usual. Punjab particularly faced the extreme weather conditions and the government decided to meet the increased demand of residential consumers on priority by reducing supplies to some other sectors and suspending gas supply to CNG stations for two months.

However, some CNG operators filed a petition which “the Islamabad High Court unfortunately accepted and ordered provision of gas to CNG stations in Rawalpindi and Islamabad”. This, he added, worsened the gas crisis in the two cities. “We filed a review petition in the IHC, but unfortunately no change could come about and we had to restore gas to CNG stations for three days a week,” he said.

Accompanied by Petroleum Secretary Abid Saeed, the minister said the government had filed an appeal in the Supreme Court and would implement whatever decision was announced by the apex court.

Mr Abbasi said the PML-N government could not be blamed for the current crisis because the situation did not arise in six months, but claimed that the crisis would significantly reduce in the next winter and move into surplus zone when the government completed its term in five years.

He said the import of liquefied natural gas (LNG) was the shortest possible solution to the current gas shortfall and promised to deliver first LNG supplies in November.

He said the government was reviewing all gas supply contracts with captive power plants (CPPs). It neither granted even a single new contract to CPPs nor extended any and would soon take a decision on the future of the existing CPPs because it was a wrong decision to supply gas to them.

Responding to a question about diversion of gas to the industrial sector, the minister said it was done under a decision of the Economic Coordination Committee of the cabinet to support industrial sector to take benefit of fresh trade opportunities in the European market and earn foreign exchange.

He claimed that only 100mmcfd of gas was being provided to the entire industrial sector in the transmission network of Sui Northern Gas Pipelines Limited – Punjab and Khyber Pakhtunkhwa.

Mr Abbasi said that about 1200mmcfd of gas was being provided to residential consumers in the SNGPL system while there was negligible gas problem in the SSGCL network.

Responding to a question, the minister said gas tariff would increase on two fronts, but the prime minister had given clear instructions to protect domestic consumers from any increase. The tariff for other consumers would be increased on the basis of determination by the Oil and Gas Regulatory Authority, while another increase would occur when the cost of imported LNG is passed on to consumes as part of weighted overall average price of gas.

He said the government was in the final stage of announcing petroleum exploration rules to expedite fresh exploration and would shortly offer lucrative incentives for shale gas production. -Dawn