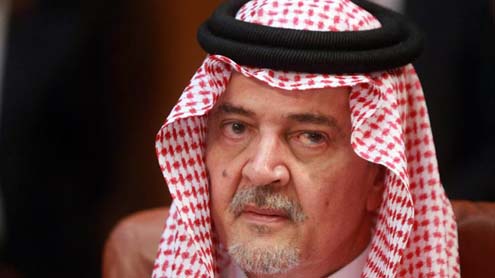 ISLAMABAD: Saudi Arabia made it clear on Tuesday that it has nothing to do with former president Gen (r) Pervez Musharraf’s high treason case and Riyadh does not want to interfere in internal matters of Pakistan.

Addressing a press conference along with Adviser to the Prime Minister on Foreign Affairs Sartaj Aziz, Saudi Foreign Minister Prince Saud Al-Faisal denied he had brought any message for the Pakistan government with regard to Musharraf’s trial.

The Saudi foreign minister was asked about rumours that Saudi Arabia might intervene to secure the release of Musharraf. “Musharraf’s trial is an internal matter of Pakistan,” Prince Saud said.
He said Pakistan and Saudi Arabia enjoy historic and deep-rooted relations and added that designs of those who were plotting to damage Pak-Saudi relations should be thwarted.

“We are friends and friends do stand with each other in all circumstances. It is a visit of friendship.”
Prince Saud Al-Faisal said he had brought a special message from King Abdullah for the Pakistani leadership, which he had conveyed to President Mamnoon Hussain. He, however, did not elaborate content of the message. He said his country would extend cooperation to Pakistan in energy and other sectors.

Saud Al-Faisal also said there was need for joint efforts to eradicate the menace of terrorism.
He said that international troops were drawing down from Afghanistan by the end of this year and efforts were required to stop the terrorists from regrouping and fill the gap being created due to the withdrawal of international forces.

He said that Afghanistan was going through a critical phase and a cautious approach should be adopted to restore peace in the country especially after withdrawal of the US forces.

He said Afghanistan is going to a turning point and if there is a vacuum, it would be filled. “We are calling on the Afghans to let the interests of Afghanistan guide their actions instead of small tribal and other objectives. If the Afghans do this, they can pass their turning point with safety.”

About the issue of Syria, the Saudi foreign minister called upon all the groups to sit together to find a peaceful solution to the crisis. He said the Organisation of Islamic Countries (OIC) should also be used for more interaction between the Muslim countries.

Pakistan and Saudi Arabia also agreed on Tuesday to increase cooperation in all fields, including investment, trade, energy and export of skilled and semi-skilled manpower to the Kingdom of Saudi Arabia.

Sartaj Aziz said both the sides had reiterated to further expand their relations for the benefit of their people. He said Pakistan and Saudi Arabia have agreed to enhance cooperation in a broad spectrum of areas, especially investment, trade and energy.

He said Prime Minister Nawaz Sharif has informed the Saudi foreign minister about his government’s plans to enhance growth, create job opportunities and reduce poverty for a brighter future of Pakistan.

The adviser said both the countries shared similarity of views on international and regional issues. He said Pakistan and Saudi Arabia stood by each other and shared views on peace and stability in the region.

He said that in the face of many challenges that confront the region, it was a matter of great satisfaction that Pakistan and Saudi Arabia stood together and shared their views on peace and progress of the region.

“I am confident that the fraternal bonds between Pakistan and Saudi Arabia will continue to grow and gain further strength in the years ahead.”dailytimes