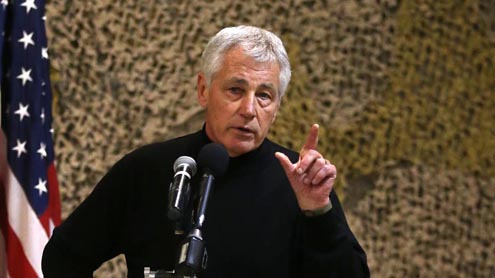 US Defence Secretary Chuck Hagel arrived in Pakistan Monday for meetings with Prime Minister Nawaz Sharif and the nation’s new army chief, hoping to further repair a strained and sputtering relationship between Washington and Islamabad.

His visit comes on the heels of the latest interruption of US military shipments out of Afghanistan through the main border crossings into Pakistan. Anti-American protests along the route in Pakistan prompted the US to stop the shipments from Torkham Gate through Karachi last week, due to worries about the safety of the truckers.

The protests center on the CIA’s drone program, which has targeted and killed many terrorists but has also caused civilian casualties. Pakistan has called the drone attacks a violation of the country’s sovereignty, but the issue is muddied by the fact that Islamabad and the Pakistani military have supported at least some of the strikes in the past.

The Pakistani government blocked the routes for seven months following US airstrike’s that accidentally killed two dozen soldiers on the Afghan border in November 2011. Pakistan finally reopened the routes after the US apologized. The rift led the US to sever most aid to Pakistan for some time, but relations were restored in July 2012.

Since then, the US has delivered over $1.15 billion in security assistance to Pakistan, including advanced communications equipment, roadside bomb jammers, night vision goggles and surveillance aircraft. A senior defense official said these issues will come up in Hagel’s meetings, and acknowledged the lingering tensions between the two countries.

Over the past year, relations between Washington and Islamabad have been improving, and Sharif met with President Barack Obama and Hagel in late October in Washington. Hagel is expected to tell Pakistani leaders that the US wants the border crossings to remain open, said the defense official, who was not authorized to discuss the private meeting plans publicly and requested anonymity.

The US has also been frustrated by Pakistan’s unwillingness to target the Haqqani terrorist network, which operates along the border and conducts attacks on US and coalition troops in Afghanistan. Defense officials said Hagel will be the first high-ranking US official to meet with Gen Raheel Sharil, who took over as head of Pakistan’s powerful Army at the end of last month.

The last Pentagon chief to visit Pakistan was Robert Gates in January 2010. Hagel flew to Pakistan from Afghanistan, where he visited US troops but declined to meet with President Hamid Karzai, who has rankled the US by refusing to sign a security agreement before year’s end. – Dawn