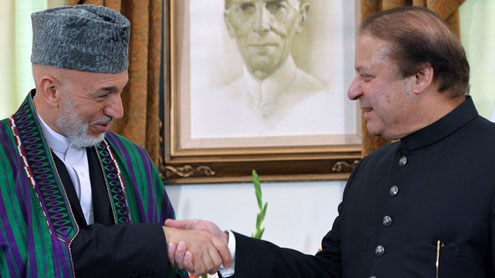 The one-day visit, confirmed by the foreign ministry, comes a week after Sharif met a delegation from the Afghan High Peace Council, which is tasked with opening negotiations with Taliban insurgents as Nato forces withdraw from the country by the end of 2014. Karzai is stalling on signing a security pact with Washington that would allow a contingent of US troops to stay on for training and counter-terror missions.

Support from Pakistan is seen as crucial to peace after Nato troops depart, but relations between the two nations have been uneasy. It will be Sharif’s first visit to Afghanistan since he took office in May for a third term as prime minister.

“He will meet with President Karzai and will discuss issues of mutual interest. Both the leaders will discuss the peace and reconciliation process in Afghanistan,” said Aizaz Ahmad Chaudhry, a foreign ministry spokesman. Karzai and Sharif met British Prime Minister David Cameron in London last month in the fourth of a series of trilateral meetings designed to foster stability in the volatile South Asia region.

The meeting was considerably more low-key than one hosted by Cameron at his official country retreat in February, which ended with grand promises of a peace deal within six months. -Dwan