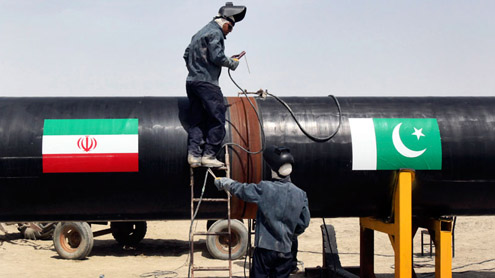 As top US and Pakistani officials met here on Tuesday to consider plans for helping Islamabad overcome its energy crisis, Pakistan reminded the Obama administration that it was under “contractual obligations” to complete the Iran gas pipeline project.

Talking to Dawn, Minister for Water and Power Khawaja Muhammad Asif expressed the hope that improved relations between the United States and Iran would also ease American pressures on this issue. Minister for Petroleum and Natural Resources Shahid Khaqan Abbasi said Pakistan was seeking new technology and investments from the United States to meet its ever increasing energy demands. Earlier, top USb and Pakistani officials and investors began a day-long meeting at Washington’s US Institute for Peace to discuss various proposals for enhancing bilateral cooperation in the energy sector.

“Building the Iran-Pakistan gas pipeline is our contractual liability,” said Khawaja Asif while explaining his government’s position on the controversial project. “If we do not, we will have to pay the penalty for breaching the contract.” Without naming the US administration, the minister said that those who wanted Pakistan not to build the project “should be ready to pay the fines”. A US law requires the Obama administration to oppose major foreign investments in Iran’s oil and gas industry. Those who breach the restrictions can face US sanctions.

Pakistan, however, insists that the pipeline project does not breach this law as Iran, and not foreign investors, were building the pipeline. Last week, the US and Iran came close to reducing their differences which, Mr Asif said, was a good sign for the pipeline project. The minister also said that Pakistan was committed to building both Dasu and Bhasha dams. “It is not either one or the other.

We need both and we will build them with our resources if we do not get outside support,” he said. Officials who attended the meeting said delegates also considered a proposal for the integration of energy infrastructure in South Asia, which can bring gas and oil from energy-rich to energy-starved nations. This includes encouraging energy cooperation between India and Pakistan and building the Turkmenistan-Afghanistan-Pakistan-India pipeline, which, unlike the Iranian project, enjoys US support. Carlos Pascual, the US Special Envoy and Coordinator for International Energy Affairs, the two visiting ministers from Pakistan and the US ambassador in Islamabad, Richard Olson, co-chaired Tuesday’s meeting.

“The US and Pakistan have worked closely and on a sustained basis to better develop and diversify Pakistan’s energy sector, a key priority of the Pakistani government and people,” said a US official. “The US has supported increased energy generation, improved distribution, management, revenue collection, and policy reform,” he added. Other proposals discussed at the meeting include exploring alternate sources of energy and helping Pakistan develop its capabilities in those fields, including solar energy. Shahid Khaqan Abbasi told Dawn that Pakistan was seeking technological cooperation from the US to tap its huge reserves of shale gas, which, he said, were the 9th largest in the world. -Dawn