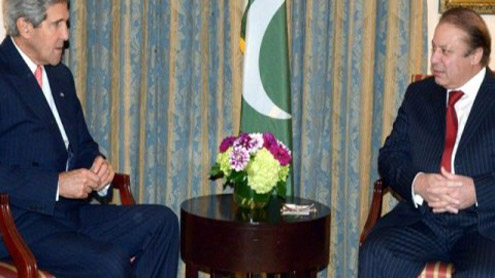 US Secretary of State John Kerry on Tuesday telephoned Prime Minister Nawaz Sharif and discussed the current tension in Pak-US relations that arose from the killing of Taliban chief Hakimullah Mehsud in a US missile strike.

Some Pakistani politicians have demanded that transit routes through Pakistan, used to supply NATO-led forces in Afghanistan, be cut in response. Officials said in his telephonic conversation with the US Secretary of State, the PM pointed out that missile strikes have sabotaged the Pakistani government’s planned peace talks with the militants, and that the Washington must keep Islamabad’s sensitivities in view.

John Kerry assured that his country respects Pakistan’s sovereignty and integrity. He highlighted the need for strong relations between the two countries and vowed to support Islamabad in war against terrorism, officials said. Kerry added: “… we are sensitive to the concerns of the country and we look forward to working very closely with the government of Pakistan.”

“We intend to continue to work together with them (Pakistanis) through the strategic dialogue that we have established in order to work through these kinds of challenges.” The United States on Monday admitted to “tensions” and occasional “misunderstandings” in its relations with Pakistan, and hoped that both the countries would continue working to repair their strained relationships. -Pakistantoday