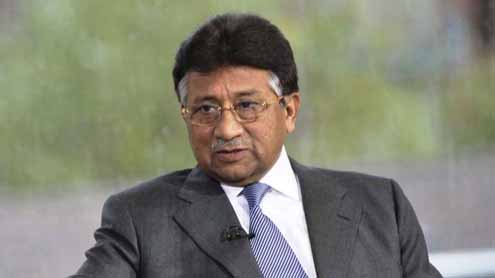 Musharraf has now been granted bail in three major cases against him, including one relating to the assassination of former prime minister Benazir Bhutto.

His lawyer said the ruling meant he was a “free man”. But he is likely to remain under heavy guard at his villa on the edge of Islamabad, where he has been under house arrest since April, because of serious threats to his life. Musharraf was head of state in 2006 when Akbar Bugti was killed during an army operation. His lawyer Ibrahim Satti said a three member Supreme Court bench had granted bail in the Bugti case in return for surety bonds worth two million rupees. Another counsel for Musharraf, Qamar Afzal, said bail was granted due to lack of evidence. “Pervez Musharraf is a free man now after getting bail in the Bugti case,” Afzal said. As well as the Bugti and Bhutto cases, Musharraf also faces cases over the suspension of judges during emergency rule, which he imposed in 2007. The Taliban have threatened to kill the 70-year-old former general.

After getting bail in the Bugti case, the sub-jail status of Musharraf’s residence will likely end as the court has already granted him bail in judges’ detention and Benazir murder cases. The bench, headed by Justice Nasirul Mulk and comprising Justice Sarmad Jalal Usmani and Justice Musheer Aalam Khan, asked Musharraf to submit two surety bonds of Rs 1 million each. The court observed that substantial evidence was not available to establish that Musharraf was involved in the criminal conspiracy regarding the murder of Bugti.

This is a case of criminal conspiracy for which solid evidences are required, and due to their unavailability, there is no justification for rejection of the bail plea,” the court ruled. It asked Balochistan Additional Prosecutor General Tahir Khattak about the evidences which had been gathered against Musharraf and whether anyone had witnessed him conspiring against Bugti. Khattak told the court that according to the statements of co-accused, Musharraf had ordered action against Bugti. He stated that a CD recording was also available to prove this. Khattak said that Bugti was killed on the directives of Musharraf. Dailytimes