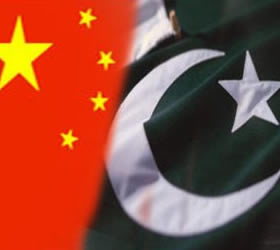 Chinese Premier Wen Jiabao left here for China on Sunday after completing three day official visit to Pakistan. The Chinese Premier and his delegation was seen off at the airport by Prime Minister Syed Yusuf Raza Gilani, members of federal cabinet and other civil and military officials.
A contingent of Pakistan Air Force presented salute to Chinese Premier when he was proceeding to his special aircraft.
He also met with the Chinese Nationals working in Pakistan on various projects and were present at the airport to see him off. These Chinese were waving green and red flags.
The Chinese Premier was presented album comprising photos of his three day visit to Pakistan.
Wen Jiabao visited Pakistan on the invitation of Prime Minister Syed Yusuf Raza Gilani.
He held meetings with President Asif Ali Zardari, Prime Minister Syed Yusuf Raza Gilani and leading Pakistan politicians. The two sides signed agreements and memorandums of understandings to bring about $ 25 billion Chinese investment to Pakistan with in next three years.
The Chinese Prime Minister addressed the joint session of Parliament and met with people from various walks of life who contributed to the growing friendship between Pakistan and China. – The Nation

Time to sit with Shujaat over: Nawaz

Time to sit with Shujaat over: Nawaz