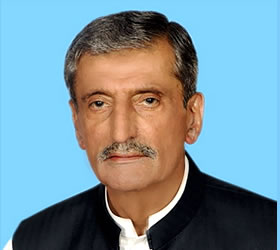 ISLAMABAD: Minister for Railways Haji Ghulam Bilour has said that at least 4,231 acres land of Pakistan Railways is under illegal occupation by individuals, and various government departments and institutions. In a written reply, the Minister informed the House during the  question hour here Monday that 1,159 acres land is being encroached by government departments, while 3,072 acres of land is in illegal possession of individuals.
Giving details, he said that 396 acres land under occupation in Peshawar, 103 in Rawalpindi, 2,420 in Lahore, 237 in Multan, 260 in Sukkur, 249 in Karachi and 566 in Quetta.
He said that steps are being taken to remove encroachment from these lands and regular antiencroachment operations are conducted by each division with the help of PR and district police.
He further said that FIRs are lodged and police memos are issued against illegal occupants, adding that occupation of Railways? land by government department has already been taken up with the concerned departments and is being perused for mutual settlement.
To another question, he said that PR signed a contract agreement for procurement /manufacturing of 69 diesel electric locomotives with M/s Dongang Electric Corporation, China in November, 2001.
He said out of these, 15 were received as completely built units and remaining 54 locomotives were assembled/ manufactured in Pakistan Locomotive Factory, Risalpur.
He further said that an amount of Rs. 422.297 million had been allocated in 2007 for the renovation, repair and maintenance of Railway station building under revenue, improvement funds and Public Sector Development Programme.
Responding to a supplementary question Minister of State for Pakistan Railways Afzal Sindhu said that railways are in loss in many countries of the world except India and some other countries.
Speaker National Assembly in her remarks said that Pakistan Railways is not a profit earning department rather it is a welfare department and the government should have to introduce some policy to curtail its losses. – App
Twitter Facebook Google + Linkedin Comments