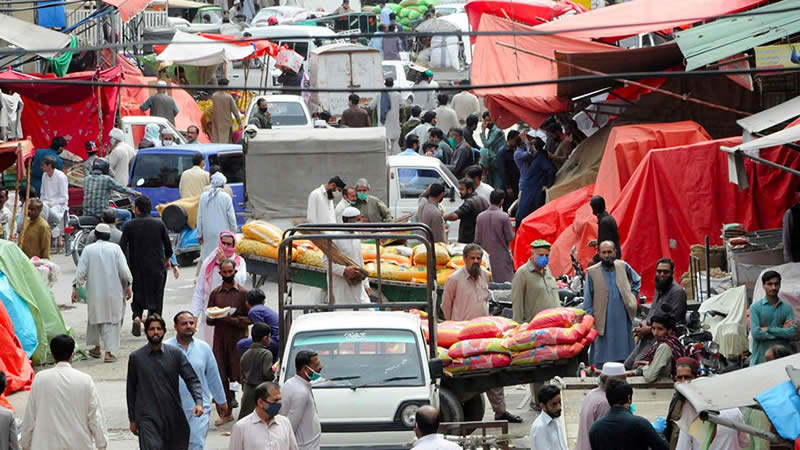 As the second wave of coronavirus tears across the country at an alarming rate, Peshawar has emerged as the frontrunner with the highest number of positive cases. Out of the 5,719 tests conducted during the recent upsurge in the provincial capital, 1,059 came back positive in the final week of November.

Health experts believe the fresh increase in the Covid-19 cases has pushed the positivity rate over 20%, making Peshawar one of the deeply troubled locations in the country.According to details released by the National Command and Operation Centre (NCOC), the provincial capital has also recorded the highest number of deaths during the second wave of the virus.

When compared with other cities in the country, Karachi took the second spot with a positivity rate of over 17%, followed by Hyderabad with over 16%.Dr. Rizwan Kundi, who serves as the president of the Young Doctors Association, linked the rise in Covid-19 cases with the negligence in following the health safety protocols.

Recalling the struggle during the first wave, he said, more than 20 doctors and several health workers died due to Covid-19 a few months ago.

“Their families are still waiting for the compensation,” he claimed.“We were hoping the government would learn some lessons from the first wave, but that never happened. We raised our concerns about the shortage of Personal Protection Equipment (PPE) during the first wave and the situation remains the same,” said Dr. Kundi. On the other hand, the provincial government placed the blame for the recent spike squarely on the shoulders of the opposition parties, who have been protesting across the country and most recently in Peshawar.

“The cases clearly increased after the Pakistan Democratic Movements (PDM) rallies in the country and particularly in Peshawar,” claimed K-P Health and Finance Minister Taimur Saleem Jagra. The minister said the death ratio has also increased since the last PDM rally in the province.

Jagra vowed that the provincial government would do everything to protect frontline workers. “We will compensate the families very soon,” the minister pledged.Shortly after the PDM rally in Peshawar, the Pakistan People’s Party Chairman Bilawal Bhutto and Awami National Party leader Samar Bilour tested positive.

While the government has blamed the opposition for the increase in the number of cases in Peshawar, other cities in the province are also reporting a surge.

Kohat reported over 18% positivity rate, Khyber over 15.8%, Lakki Marwat over 15.48% and Abbottabad over 14.43%. Across K-P, the lowest positivity ratio was reported in Buner where a total of 116 tests were conducted and one came back positive.

The positivity ratio in the area stands at 0.86%. Interestingly, while coronavirus is raging across the province, Kohistan Lower and Kolai Pallas had no cases. Both districts are Covid-free.According to data collected by the Johns Hopkins University, Pakistan reported more than 2,940 cases on December 1, which pushed the total nationwide tally over the 400,000 mark.

To bring the pandemic to an end, every country has to bring the curve of daily cases down to zero. Health experts believe that can only be achieved if maximum number of people follow all standard operating procedures.So far, in K-P, the government has set up several testing labs.

According to Khyber Pakhtunkhwa Public Reference Lab Director Dr. Ikram Ullah, 18 public testing facilities have been established across the province. Dr. Ikram Ullah cautioned that flouting health guidelines and standard operating procedures laid by the government have contributed to the rapid increase in cases.