PPP Has No ‘Match’ To Win Against PTI: Zardari 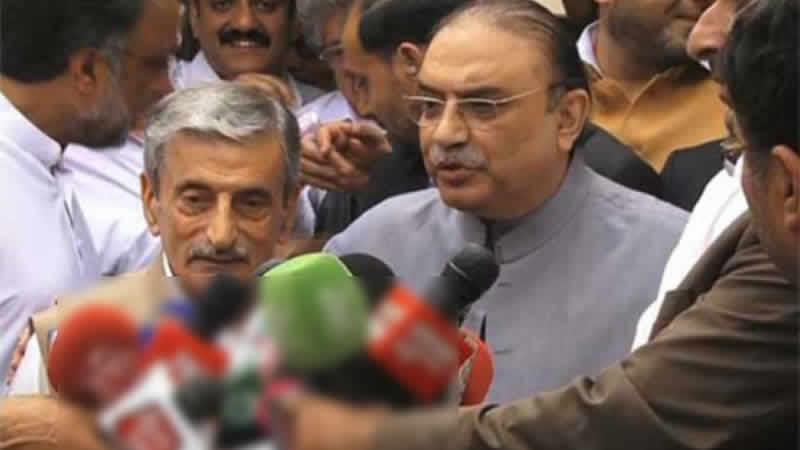 PPP has no 'match' to win against PTI Zardari

Co-chairman of Pakistan People’s Party (PPP), Asif Ali Zardari has said on Tuesday that the political organisation has no ‘cricket match’ to win against Pakistan Tehreek-e-Insaf (PTI) but the real aim is to make efforts to better Pakistan.

The former president paid a visit to the residence of Ghulam Ahmed Bilour, Member of the National Assembly (MNA) and offered condolences over his wife’s death. Former Chief Minister (CM) of Sindh, Qaim Ali Shah, Leader of the Opposition in National Assembly (NA), Khurshid Shah, president of PPP’s Punjab chapter Qamar Zaman Kaira among other appointees of the party accompanied Zardari.

While talking to the media before leaving, Zardari demanded Prime Minister (PM) Nawaz Sharif to offer an explanation over an article published in New York Times. He said that the Pashtuns have always showered PPP with love and warmth and he would continue to visit cities of KP province.

While answering a question, the former president said that he had paid more visits to China than PM Nawaz during his tenure from 2008 to 2013. After visiting MPA of Awami National Party (ANP), Zardari convened meetings with parents of the martyrs of Army Public School (APS) attack in December 2014.

This is the third big gathering convened by Zardari in the metropolis of KP in the past three days. He addressed the Grand FATA Jirga on Monday and a ceremony a day prior to that on Sunday. While addressing a gathering of tribal elders of FATA he said that the rulers would face tough times if the people were facing the same.

On Sunday, he had accused the federal government of setting an impartial benefit-scope of China-Pakistan Economic Corridor (CPEC) by saying that it had ‘deviated’ from the provinces towards Islamabad. The rulers of the country believe that ‘Mughal rule’ would continue, he said.