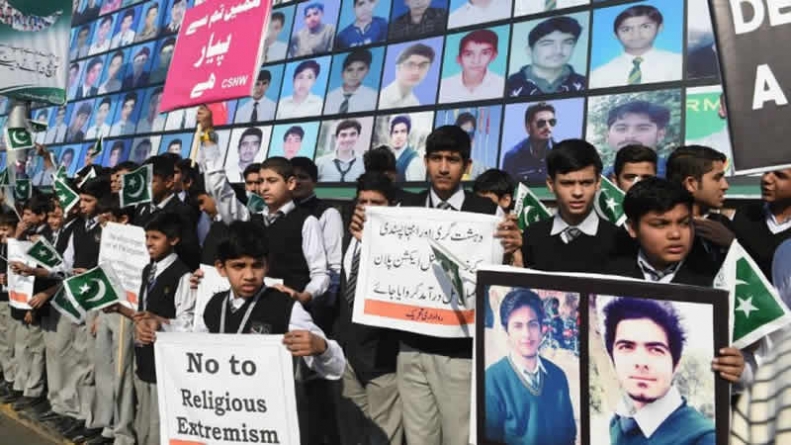 Government has decided to close all educational institutions on Friday due to security reasons in provincial capital in view of anniversary of Army Public School (APS) terror attack of December 2014.

Public holiday was announced for sharing the grief of relatives of victims of worst terror attack at APS which claimed more than 142 lives mostly young students.

The Deputy Commissioner (DC) Peshawar Shahid Mehmood notified on Thursday that all the educational institutions will remain close on Friday. In the wake of Second anniversary of APS terror attack and prevailing security situation, all the schools, colleges and universities (Government & Private) in District Peshawar will remain closed on Friday, a statement reads. Pakistan responded to the attacks by lifting its moratorium on death penalty, intensifying the War in North-West Pakistan and authorizing military courts to try civilians through a constitutional amendment.

On December 2, 2015, Pakistan hanged four militants involved in the Peshawar massacre, whereas the mastermind of the attack, Omer Khorasani, was killed in a drone strike in eastern Afghanistan on 9 July 2016. The Supreme Court of Pakistan upheld the death sentences of two other terrorists. The December 16, 2014 was horrible day in Peshawar because seven militants belonging to foreign nationalities affiliated with TTP conducted a terrorist attack on the APS in Peshawar. The militants all of whom were foreign nationals, including one Chechen, three Arabs and two Afghans entered the school and opened fire on school and children killing 141 people, including 132 schoolchildren, ranging between eight and 18 years of age.

A rescue operation was launched by the Pakistan Army’s Special Services Group (SSG), who killed all seven terrorists and rescued 960 children and staff. Martyrs of APS render immense sacrifices for a great cause: Chairman, Qaumi Watan Party (QWP) Aftab Ahmad Khan Sherpao has said that the martyrs of Army Public School (APS) have rendered immense sacrifices for a great cause which would have no parallel in the annals of the world. Paying glowing tributes to the martyrs on the second death anniversary, he said that their sacrifices had vindicated the reality that even the worst oppression could not defeat a nation.

In a statement, Sherpao lambasted at the terrorists for having targeted the innocent children and teachers through savage but their nefarious designs had failed to create fissures in our society. He maintained that the meritorious sacrifices had forged unity in the whole nation which was instrumental in the National Action Plan. He said that the horrible carnage of APS had brought national leadership on single platform and the country got international support. However, he regretted that the opportunity could not be properly utilized for the eradication of extremism and terrorist.

He deplored that NAP was not implemented in letter and spirit so as to remove the hazardous clouds from national atmosphere. QWP chairman deplored that Pakhtun had rendered untold human and material sacrifices however; they had not been provided any relief which aggravated their sense of deprivation. He said that NAP should be truly enforced and should be made dynamic and proactive documents to serve the needs of the country.

He called upon the Federal government to discard step motherly towards Pakhtun and remove their grievance. Kohat Police held 78 person, recover arms: The Kohat Police has arrested 78 people in recent crackdown operations against drug dealers, weapon dealers and others involved in illegal activities throughout the district Kohat. The District Police Officer (DPO) Javed Iqbal said that Kohat Police has arrested 78 suspects on the charge of criminal activities in the district. Others were arrested with arms and ammunition in procession for killing people, robbery and accusation grabbing others lives and properties. Special teams of police were made to conduct strike and search operations in their localities against all the criminals.