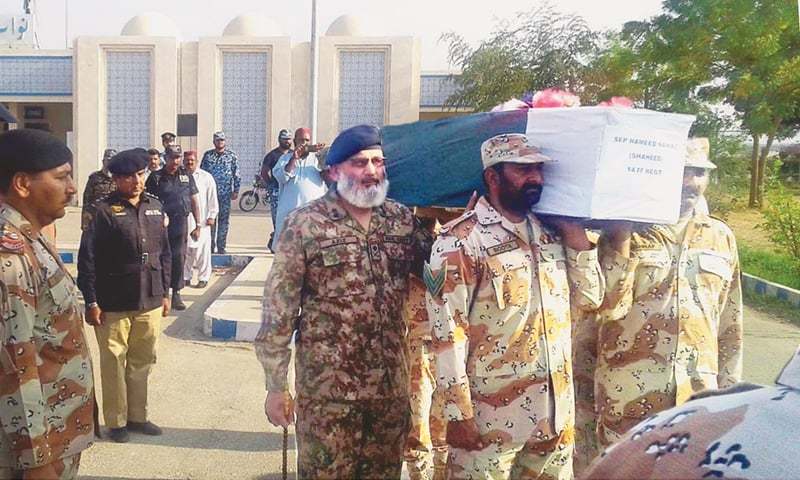 Army Chief Gen Raheel Sharif has expressed satisfaction over the ongoing offensive in parts of North Waziristan where five security personnel and 34 terrorists were killed in a clash and air strikes on Saturday.

Gen Raheel was in Peshawar on Sunday to attend the funeral prayer of Captain Umair Abdullah Abbasi and four soldiers who lost their lives in Shawal and Dattakhel areas.

Inter Services Public Relations said in a statement that acting Governor Khyber Pakhtunkhwa Asad Qaisar, father of Captain Umair and senior civil and military officers were among those who attended the funeral prayer at the corps headquarters. Gen Raheel expressed solidarity with the bereaved families. Later, he visited the injured soldiers at the Combined Military Hospital. Corps Commander Lt Gen Hidayatur Rehman briefed him on the progress in the operation against militants.“Gen Raheel expressed his complete satisfaction over final push in North Waziristan to evict terrorists from isolated pockets of Shawal close to Pak-Afghan border,” said the statement.

Paying rich tribute to the sacrifices and resilience of soldiers courageously fighting terrorists in the mountainous area of Shawal, the army chief said they would go to any length to finish pockets of terrorists from any nook and corner in the country. Meanwhile, an Afghan army soldier, who suffered critical head injury in firing by terrorists on the other side of the border, was evacuated to a Pakistani post in Kitkot area of Bajaur tribal region. Sepoy Alam Zeb was given first aid at the post before being shifted to the Agency Headquarters Hospital in Khar. He was later referred to CMH Peshawar. Our Correspondent in Murree adds: Captain Umair Abbasi was buried in his native Trumthiyaan Dewal village near Murree after last rites.

His father Abdullah Abbasi, who himself is a retired army man, said he was proud that his son had been martyred while fighting against terrorists. He said if Pakistan Army demanded he would happily send his second son for the defence of motherland. Prominent among those who attended the funeral prayer were Defence Minister Khawaja Mohammad Asif, Petroleum and Natural Resources Minister Shahid Khaqan Abbasi, former governor KP Sardar Mehtab Ahmad, provincial minister Raja Ishfaq Sarwar, Corps Commander Peshawar and General Officer Commanding 12 Division Murree.