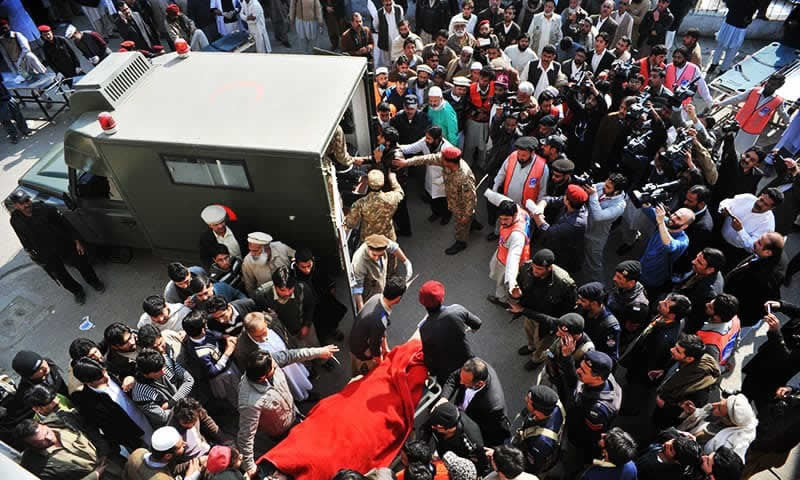 Just when everybody thought Pakistan had turned the corner by nearly overcoming the behemoth of terrorism, terror is raising, or so it seems, its ugly head again. In 20 days, there have been 60 deaths in terrorist attacks across the country.

Wednesday’s attack on Bacha Khan University’s Charsadda Campus has raised the two-day death toll to 30, including those killed in Tuesday’s suicide bombing in Jamrud.

And if intelligence-generated warnings are anything to go by, the threat is far from over. There are apprehensions of more to come, with more horrific results. Security at the national level did register remarkable improvement with 60 per cent reduction in the number of attacks. The 20-point National Action Plan is being implemented with varying degrees of success. There have been intelligence-based operations, thousands of them, and scores of militants have been arrested or eliminated. Indeed, many a terrorist plan has been thwarted as a result of these overt and covert operations. Yet, the menace is there. Tragedy after tragedy keep visiting us, reminding us of the grim reality that it isn’t over. Not yet. Pakistan has internal security challenges. But that’s just one aspect of it. Driven from their sanctuaries in the tribal borderlands, Pakistani militants have found sanctuaries close to the border in Afghanistan, where they continue to train and send death squads to Pakistan to sow mayhem.

Khalifa Omar Mansoor, the former activist of the banned Lashkar-i-Jhangvi who heads his own group within the outlawed Tehreek-i-Taliban Pakistan, and who claimed responsibility for the Bacha Khan University Campus attack, operates from Naziyan district of Afghanistan’s eastern Nangrahar province. All phone calls were traced to Afghanistan. The militant commander, who also goes by his alias Omar Naray, previously masterminded and executed other major attacks in and around Peshawar, including the December 2014 attack on the Army Public School and the assault on the PAF airbase in Badabher in September last year. The attack on Imamia Mosque in Hayatabad in February 2015 that left 20 worshippers dead was also his doing. The day after the horrific APS attack, Chief of Army Staff Gen Raheel Sharif dashed to Kabul in an effort to seek Afghan President Ashraf Ghani’s help in eliminating terrorist sanctuaries in Nangrahar, Kunar and other places. Mr Ghani wanted reciprocal measures. Vows were exchanged and promises made. But nothing tangible took place. An intra-Afghan peace dialogue began and crashed.

The Afghan Taliban went on a new offensive in Afghanistan, capturing provincial capitals and district headquarters amid suicide bombings in Kabul and other places. President Ghani waited but then lost nerve, openly accusing Pakistan of waging an undeclared war against his country. Realising that he could not possibly salvage the situation without Pakistan’s help, he, reluctantly, reached out to Islamabad again. A video conference between the beleaguered Afghan president and Gen Raheel Sharif helped kick-start the process again, resulting in the resignation of Pakistani security establishment’s long-held bête noire, the intelligence chief of Afghanistan’s National Directorate of Security, Rehmatullah Nabeel.