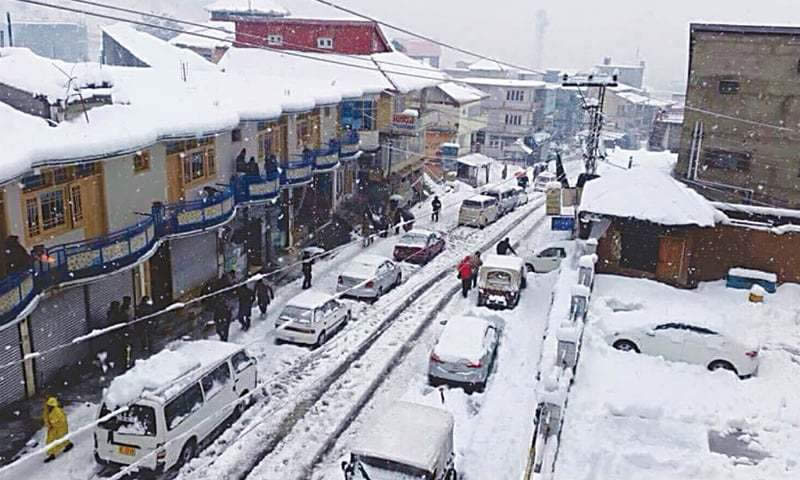 A spell of heavy snowfall paralysed Naran Valley, one of the popular tourist spots in the country, on Sunday.

Over 1,000 tourists were stranded in the valley and long lines of cars and other vehicles were there on roads blocked by piles of snow. A miner was killed when 15 mine workers were hit by an avalanche in Bassar area of Kaghan.

Heavy rain and snowfall also lashed other regions of Mansehra district and upper parts of Hazara division. Rain and snowfall were also reported from other parts of Khyber Pakhtun­khwa and adjacent tribal areas which brought down the mercury level and heralded the onset of early winter. The Peshawar Met office has forecast more rain and snow. Abbottabad, Balakot and Kohat received 52mm each of rain and Peshawar 21mm on Saturday and Sunday.  Heavy downpour and snowfall were also reported in Malakand division, Hunza, Gilgit-Baltistan and Kashmir. Life was almost at a standstill in Naran. Mustafa, a police officer, told Dawn on phone that over two feet of snow had accumulated on roads and vehicles were unable to move.

He said the stranded tourists had been provided shelter by local people and announcements were made from mosques appealing to owners of hotels to provide free accommodation to them. Advocate Babar Khan Yousafzai, one of the people stranded in Naran, said he and his companions had run out of fuel and there was no electricity in the area. He said the local hotel association had provided free accommodation to tourists. According to him, 500 to 600 vehicles were stuck on roads. “We are worried about our children because there is no heating arrangement in rooms,” said Mr Yousafzai, who is a regular traveller to northern areas. “Hoteliers must be praised for providing accommodation to the stranded tourists; otherwise we have not yet seen any official of local administration. People left their vehicles on roads and rushed to the hotels,” he added.