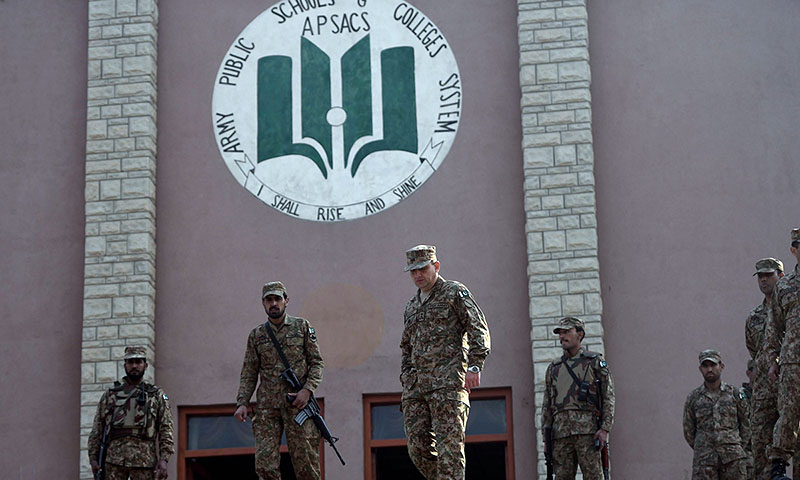 The terror-hit Army Public School (APS), along with other private and government educational institutions resumed their activities on Monday (today) in Khyber Pakhtunkhwa after obtaining no-objection certificate (NOC) from the provincial government.

The schools which were able to fulfill the criteria set by the government were issued NOCs whereas some institutions which failed to make arrangements such as installation of CCTV cameras and higher boundary walls across the campus boundaries were not issued the NOCs. “Schools with not enough security arrangements would not be allowed to reopen,” KP Information Minister Mushtaq Ghani had said on Jan 8. The government monitors would assess security measures taken at the schools, he had added. Senior Superintended of Police Dr Mian Mohammad Saeed told Dawn that officials of different police stations had inspected 1,440 schools in Peshawar. Of them, only 118 schools were given NOC, he said. Security arrangements at 1,380 schools are not satisfactory, he said, adding that such schools had been issued a security advisory.

Besides, the SSP said that police would be on high alert from early morning till the end of school hours. All the police mobile vans would be moving on roads to ensure security to the schools, he said. However, many schools which were not issued NOCs have already resumed operations in the rural areas of the province. Earlier, the provincial government had to face criticism by educationists over its failure to announce a definite date for the reopening of local schools, saying the extension in winter vacation had been adversely affecting the studies of schoolchildren. Moreover, Chief of Army Staff General Raheel Sharif also attended a commemorative service held at the Army Public School in honour of those who had lost their lives during the Dec 16 Taliban attack on the school. A tweet by Director General Inter-Services Public Relations Major General Asim Bajwa said Gen Raheel also met with the students and teachers at APS.

Strict security arrangements were seen in place for the re-opening of APS in Peshawar.