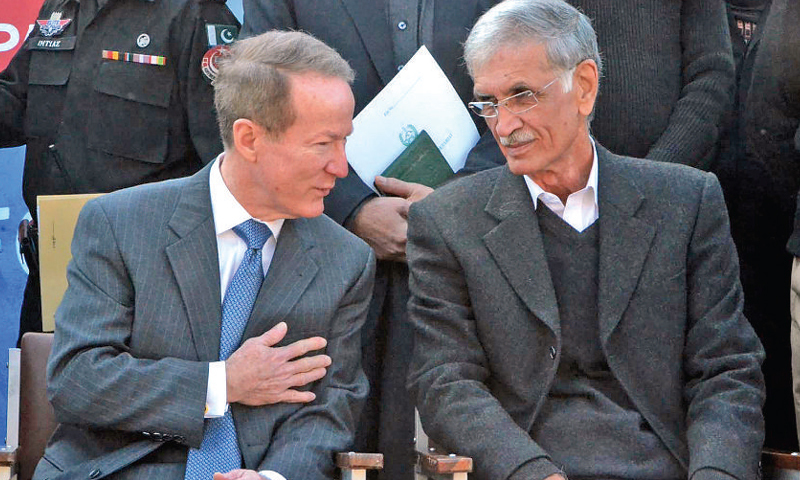 Talking to media persons after inaugurating a branch of the Bank of Khyber at Jehangira here on Wednesday, Mr Khattak criticised the federal interior minister for what he said his hypocritical style of politics.

Mr Khattak said that Ch Nisar had also made attempts to meet him (Khattak), but after failing to do so, he started propagating that I had met him secretly to seek his (Nisar’s) help in saving the Khyber Pakhtunkhwa government. “I met him (Nisar) openly in the Punjab House and kept PTI chief Imran Khan in the loop about the meeting.” Mr Khattak said that Ch Nisar could deny the meeting with Imran Khan, but he had proofs of it. Regarding the deadlock between the government and PTI, the CM said that Imran Khan was still ready for meaningful dialogue to resolve the differences. Mr Khattak said that the ongoing protest would continue till the government didn’t initiate the meaningful dialogue process and announced the judicial commission.

He lauded the appointment of the new Chief Election Commissioner, but said that the commission should be restructured after resignations of its members from the provinces. The chief minister said that the provincial government was struggling to bring an end to corruption and favouritism to improve governance in Khyber Pakhtunkhwa. He said that number of branches of the Bank of Khyber would be increased across the country with the passage of time to provide maximum facilities to people. On the occasion, Mr Khattak announced that Jenagira would be made a tehsil, and that a notification in that regard would be issued shortly.

POLICE TRAINING CENTRE INAUGURATED: The Chief Minister Pervez Khattak inaugurated a joint police training centre (JPTC) here on Wednesday The JPTC is a modern training center and the first of its kind in Khyber Pakhtunkhwa. The facilities include barracks, helipads, a 400-meter shooting range, rappelling towers, combat sheds, and mock urban and rural terrain settings. The nine-million-dollar centre funded by the US State Department’s Bureau of International Narcotics and Law Enforcement Affairs (INL), will train up to 600 Khyber Pakhtunkhwa police officers and 200 levy forces annually in modern and advanced policing methods. Speaking on the occasion as the chief guest, Mr Khattak appreciated the sacrifices of police department for peace and eliminating militancy in the province.

He said that the government was trying its level best to make police department stronger and independent of interference. Mr Khattak said that his government was legislating so that no government could use police for political gains. The chief minister, besides approving 385 training officers’ posts to the elite police training centre, also accepted the application of 40 per cent special allowance to the teaching staff. He also assured funds for purchase of latest equipments for the training centre. “Government will extend all kind of support to police to protect lives and properties of people and maintain peace in the society.” Speaking on the occasion, US Assistant Secretary and head of the US State Department’s Bureau of International Narcotics and Law Enforcement Affairs (INL), William R Brownfield said that the United States was proud to support efforts to improve citizen security and enhance police capacity in Khyber Pakhtunkhwa province.

He said: “This has all been achieved because of the remarkable partnership we share with the Pakistani government and people, including the law enforcement professionals who risk their lives each day to protect their communities.” Since 2008, the Bureau of International Narcotics and Law Enforcement Affairs has worked with Khyber Pakhtunkhwa police and financed the construction of police lines in Swat, as well as donated vehicles, radios, surveillance equipment, and lifesaving personal protective gear. On the occasion, IGP Nasir Khan Durrani said that Khyber Pakhtunkhwa police had played a remarkable role in withstanding the onslaught of terrorism. Police have been able to prevent terrorists from taking control of any part of the settled area, he claimed. -dawn