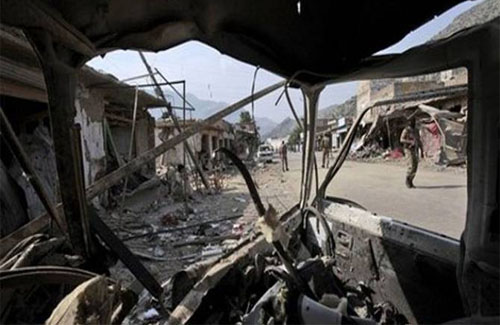 At least seven volunteers of a government-backed peace militia were killed and 15 others sustained injuries when a suicide bomber exploded himself in the middle of militiamen in Tirah Valley’s Peer Mela area, official and local sources said on Wednesday.

The volunteers of Tawheedul Islam were having a meeting when a suicide bomber detonated himself.

All the deceased hailed from Zakhakhel tribe. Two kids were also among the wounded who were shifted to nearest healthcare centre for treatment.  Nobody claimed responsibility for the incident although Tawheedul Islam and Defunct Lashkar-e-Islam have been launching attack on one another.  Militants from across Pashtun areas along the Afghan border have flocked to the Tirah Valley since the army launched an offensive against Taliban in the North Waziristan region, to the south, in July.“A peace committee meeting was in progress when the suicide bomber entered and blew himself up,” said a Pashtun elder, referring to the pro-government tribal militia.

Pakistani Taliban militants battling the state regularly attack people and groups who support the government. Separately, an Islamist faction spokesman said a member of a new Al-Qaeda offshoot, Al-Qaeda in the Indian Subcontinent, was killed in an attack by a missile-firing US drone aircraft in the valley last Saturday.

The spokesman, Usama Mahmoud, identified the militant who was killed in the drone strike as Imran Ali Siddiqi, also known as Waliulla, who had been involved in militancy since 1990 and had served eight years in prison over an attack on the US consulate in Karachi. He was killed along with six other people, Mahmoud said in messages on Twitter that were translated by the SITE intelligence group, which monitors militants communications.

Meanwhile, the security forces have claimed to seize huge ammunition in blockade conducted by forces on Wednesday here in Chotta Nehr (small canal) area of tehsil Jamrud of Khyber Agency, official sources said. On a tip off the Swat Scout officials barricaded the road and stopped a suspected motor car, Fielder for checking.

During search 45 mortar shells were recovered from the car. Two persons were apprehended and shifted to forces cantonment for investigation, sources said. The arrested persons were identified as Imran Khan of Peshawar and Zaitun Zakha Khel of Landi Kotal. -nation