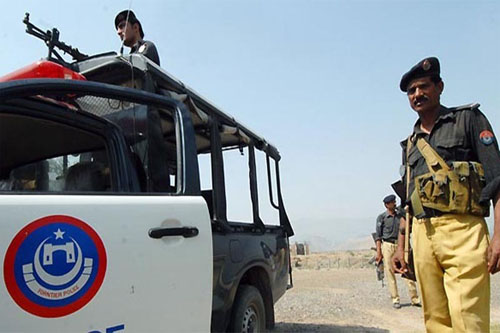 An assistant sub-inspector (ASI) was shot dead by unidentified assailants in the early hours of Thursday near Wazir Bagh area of Peshawar.

Police said armed men opened fire on ASI Asif Mehmood’s vehicle near Yakatoot police station as he was travelling with his son to drop him to school.

Mehmood died on the spot, police said, adding that the assailants sped away on their motorcycle after launching the attack. Mehmood, whose body was shifted to Peshawar’s Lady Reading Hospital, was serving as ASI at the Yakatoot police station. Late on Wednesday, unknown gunmen shot dead two people in Peshawar’s Sufaid Dheri area. No arrests have been made so far in connection with that incident. [contentblock id=2 img=adsense.png]

The attack on the ASI comes days after the a suicide attack targeted high-ranking military official Brigadier Khalid Bajwa in the provincial capital of KP. Javed narrowly escaped the explosion and the attack was claimed by the Tehreek-i-Taliban Pakistan (TTP). Peshawar is the capital of Khyber Pakhtunkhwa province and has seen scores of attacks on law enforcement personnel in the past.

The city is also the home to the XI Corps, an administrative corp of the Pakistan Army which manages all military activity in KP and is currently engaged in the army offensive in North Waziristan.