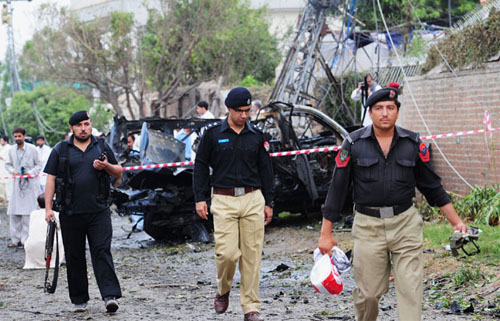 A teacher was killed and two children injured on Wednesday when a hand-grenade attack took place on a school in the Shabqadar area of Peshawar.

Sources said the school had received letters a month earlier which threatened the administration to direct students to wear shalwar kameez instead of pants and shirts.

According to police sources, unidentified miscreants threw a hand-grenade on Askari Public School and College in Shabaqadar area. The explosion resulted in the death of school teacher Madam Honey and injured two children. Sources said that miscreants fled the scene after launching the attack and a search operation was under way.

Pakistan Tehreek-i-Insaf (PTI) Chairman Imran Khan and Chief Minister Pervez Khattak have condemned the attack and sympathised with the families of those targeted. Earlier, the PTI government had also decided in principle to remove ‘

objectionable material’ from the textbooks of local primary schools to please the key partner of the ruling coalition, Jamaat-i-Islami. JI had objected to pictures of girls without dupatta, X-mas cake, Cross emblem, good morning expression.