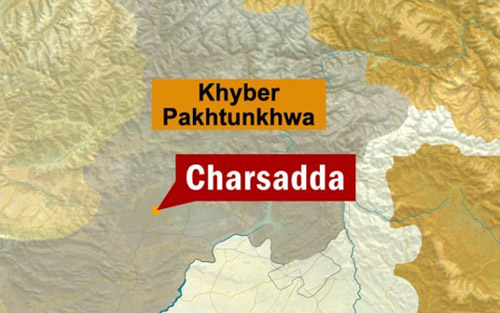 At least three people were killed and several others wounded on Tuesday in an explosion near a police vehicle in Farooq Azam chowk of Tehsil Bazaar in Charsadda.

According to district headquarters hospital personnel, more than 30 were wounded in the attack, including policemen. The Charsadda police control room confirmed that the police vehicle was attacked in the Tehsil bazaar situated on Nowshehra road.

Police personnel and rescue teams immediately reached the site of the incident. District police officer Charsadda, Shafiullah Khan told that the explosive material was planted in a motorcycle and the police mobile van was the primary target, adding that the dead also included a shopkeeper. The injured were shifted to District Headquarters Hospital while those who were in critical condition were shifted to the Lady Reading Hospital Peshawar.

Charsadda lies close to Pakistan’s troubled northwestern tribal region where troops have been locked for years in deadly battles with insurgents. The city has seen attacks by militants in the past few years, with targets ranging from civilians to policemen and other law enforcement personnel. -Dawn