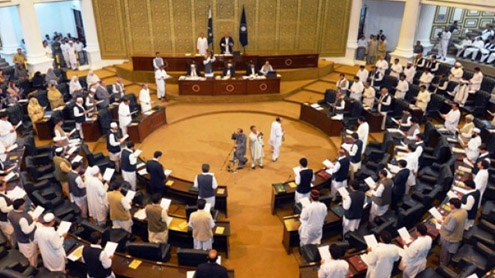 Fourteen lawmakers belonging to the Pakistan Tehreek-e-Insaf (PTI) have reportedly formed a forward bloc in the Khyber-Pakhtunkhwa Assembly, terming it a group of like-minded individuals. PTI Member Provincial Assembly (MPA) from Nowshera, Qurban Ali, is said to be heading the group, which includes Javed Naseem from Peshawar, and twelve other lawmakers from the province.

A party official confirmed the report and informed that the MPAs met in the city on Monday and demanded due share in the government and also displayed reservations at the party high-ups’ interference in provincial matters, especially over the recent appointment of ministers and advisers in the cabinet. The official said the MPAs have shown confidence in PTI Chairman Imran Khan, probably for fear of disqualification from the party, and claim that being party workers, it is their right to raise their voice for their rights as they are accountable to their followers.

The recent induction of ministers and advisers in the K-P cabinet, along with the shuffling of the health ministry portfolio, fuelled rumours of internal rifts within the party. When contacted, PTI Provincial Secretary Information Khalid Mehsud said the group is not a forward bloc but just an assembly of likeminded MPAs who share grievances with the party leadership. -Tribune

Nawaz in talks to decide ‘Exit deal’ for Musharraf