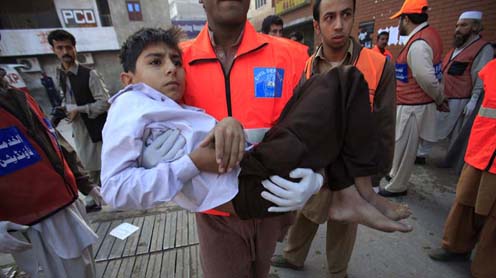 PESHAWAR: At least six people were killed and eight injured Thursday when a bomb exploded in a vehicle at a car workshop on the outskirts of Peshawar, police officials said.

According to SP Peshawar Rahim Shah, the blast completely destroyed the white Suzuki Alto parked inside the car workshop near Scheme Chowk area of the provincial capital. Shah said bomb disposal experts estimated that around 25 to 30 kilograms of explosive material were fitted inside the car when it exploded.

Television footage showed that several vehicles were destroyed by the explosion and rescue workers and policemen searching through the rubble. The blast created a crater more than seven feet wide and two feet deep at the site of the explosion.

SP Shah said that there was a possibility that the car was being fitted with an improvised explosive device and exploded prematurely. He, however, said that BDS experts were still carrying out their investigation. The injured were taken to the Lady Reading Hospital for emergency treatment. According to officials at the LRH, six bodies had been brought to the hospital.

A spokesman for the government-run hospital said two of the inured were in critical condition. No militant group has so far claimed responsibility for the blast, which follows a recent surge in Taliban violence targeting the military. -Dawn