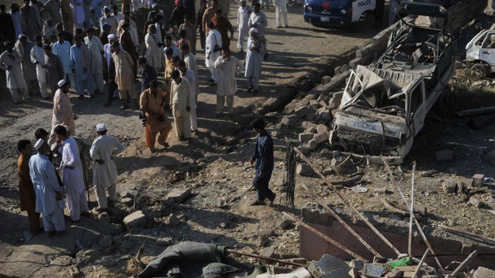 CHARSADDA: A blast in Charsadda killed six police officers and a 13-year-old student and injured nine others.

The explosion took place near a police mobile in Sardheri Bazaar. There were eight police officers in the mobile at the time of the blast. The police officers were on their way to provide security to a polio team.

The explosive material was planted in a bicycle which exploded when the police mobile passed by it, police said while talking to the media. Security forces have cordoned off the area. Some of the injured were taken to the District Headquarters Hospital in Charsadda while others were taken to Lady Reading Hospital in Peshawar. The country has witnessed several bomb explosions targeting security officials in the past couple of days.

Some eight servicemen were among 13 people killed in a suicide attack in a market adjacent to the Pakistan Army headquarters in Rawalpindi on January 20. More than two dozen people were also injured in the attack. On January 19, at least 26 security personnel were killed and 24 others injured in a bomb blast that ripped through a van in the Bannu cantonment area. The blast occurred just as Frontier Corps (FC) troops had stepped into the van ahead of their departure. -tribune