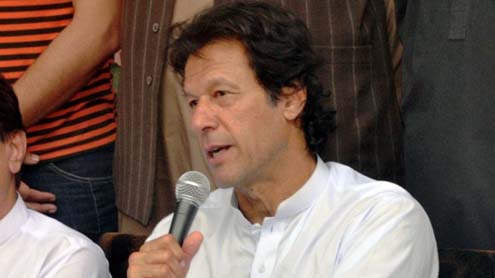 ISLAMABAD: As the party’s popularity graph plummets in the province, Pakistan Tehreek-e-Insaf (PTI) Chairman Imran Khan has fired the elected president of PTI in Balochistan.

Qasim Khan Suri, the youngest elected president of Balochistan’s PTI chapter, was quietly shown the door last week when two senior PTI leaders recommended that Khan kick him out from the party to pave the way for ‘nawabs’ and ‘sardars’ – the traditional politicians in the province.

“Imran Khan with immediate effect fired the PTI Balochistan president. Can he legally remove Suri from office? This is a big question mark,” a senior party leader told The Express Tribune on Sunday.

When contacted, Suri confirmed his dismissal and expressed his anguish over Imran’s decision. “I am a diehard worker of the party and will continue to work with the PTI. It’s me who arranged the chairman’s historic jalsa in 2012, when the party stood nowhere in Balochistan. Khan knows my contribution for the party in the province,” said Qasim Khan Suri.

“The old guard of the party has been sidelined in Balochistan. Now, sardars and landlords will bring change in the province,” a furious Suri told The Express Tribune, adding that there is no top Baloch party office bearer in the province currently.

Senior party leaders said that Suri wanted true democracy within the party ranks, but that his open criticism of Jahangir Tareen’s nomination as party secretary general without elections is a reason behind Imran’s move to remove him from this top provincial post, they added.

They said, however, that under the leadership of Qasim Suri, PTI failed to win a single seat in the May 11 elections last year. This probably led Imran to discharge him eventually, they added. On Imran’s orders, PTI Secretary General Jahangir Tareen issued a notification which states, “Balochistan provincial and district bodies stand dissolved with immediate effect.”

He also constituted an organising committee consisting of convener Humayun Jogezai, Zakariya Kasi and Mohammad Hashim Khan Panezai. “The mandate of the organising committee is to organise and enlarge the party in Balochistan, plan a membership campaign leading up to the formation of new bodies. The committee is requested to meet with the undersigned in Islamabad on January 25 to formulate a work plan.”

The development came after a confidential report of the reconciliation committee was presented by Azam Khan Swati and Ishaq Khan Khakwani to Imran, which highlighted that the PTI’s popularity fell from 37% in 2012 to zero in 2013.-tribune