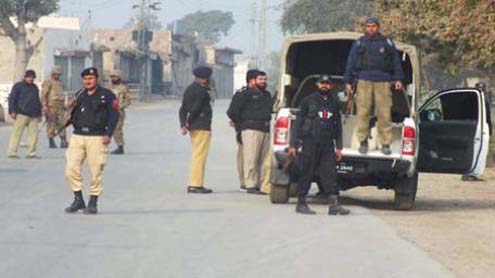 PESHAWAR: A bomb claimed by the Tehreek-e-Taliban (TTP) killed 20 soldiers and wounded 30 when it ripped through a military convoy in the restive tribal areas on Sunday, officials said.

The attack, one of the deadliest to hit security forces in recent years, happened in the city of Bannu near the North Waziristan Agency which is a stronghold of militants linked to the Taliban and al Qaeda.

“A vehicle-borne improvised explosive device caused the blast,” a senior military official told AFP, adding the exact circumstances were unclear. An official statement said 20 soldiers were killed and 30 injured in the attack, which hit one of the vehicles in the convoy at 8:45 am.

The convoy was about to leave for the town of Razmak in North Waziristan when the blast hit one of the civilian vehicles hired to move troops. “An improvised explosive device appears to have been planted in the (rented) van which caused the explosion,” military sources said.

“It remains to be investigated how a van with explosive device planted was rented.” Khyber Pakhtunkhwa Governor Eng Shaukatullah said the incident would be “thoroughly probed” and the elements involved in the heinous crime brought to court of law and justice. Tehreek-e-Taliban Pakistan spokesman Shahidullah Shahid claimed responsibility.

“It was part of our fight against a secular system,” he said by telephone from an undisclosed location. “We will carry out more such attacks in future,” he said, adding the Taliban were seeking revenge for the deaths of their former chief Hakimullah Mehsud and deputy Waliur Rehman – both killed in US drone attacks.

The Taliban vowed they would not engage in any dialogue with the government of Prime Minister Nawaz Sharif following the death of Mehsud.

But Shahid told AFP Sunday the group “is ready for meaningful negotiations despite facing huge leadership losses, if the government proves its authority and sincerity” by halting drone attacks and withdrawing troops from tribal areas.

Taliban insurgents have led a bloody campaign against the Pakistani state since 2007, staging hundreds of attacks on security forces and government targets. Bannu was the scene of a jailbreak last April when some 150 heavily-armed militants stormed a prison and freed 400 inmates including many militants.

An eyewitness told AFP by telephone the vehicle hit by Sunday’s bomb was transformed into scorched metal. “I collected human remains including hands and legs from the site after the attack,” he said on condition of anonymity.

Body parts and soldiers’ personal belongings littered the scene. President Mamnoon Hussain condemned the attack, according to a statement by his office. “Such cowardly attacks can never weaken the resolve of our law-enforcing authorities and the nation to continue pursuing their struggle against the scourge of militancy and terrorism,” the statement said.

Troops have for years been battling the Taliban and other homegrown insurgents in the tribal belt next to the Afghan border, which Washington considers the main hub of militants plotting attacks on the West and in Afghanistan.

Talat Masood, a retired general and security analyst, said the government’s policy was creating frustration within the army. “It is becoming so evident to people that the government is so ineffective and paralysed and has no policy or strategy, while the army’s hands are tied and it is being targeted and not being allowed to take action.” Pakistan, which joined the US-led “war on terror” in 2001, says more than 40,000 people have been killed in the country since then by militants who oppose Islamabad’s US alliance.

Meanwhile, Prime Minister Nawaz Sharif has decided to cancel his visit to Davos, Switzerland, in the wake of recent spike in terror attacks, specialty the one in Bannu. “Our nation is united against extremism and terrorism and the sacrifices rendered by our citizens and personnel of law-enforcement agencies will not go in vain,” a press statement on Sunday quoted the prime minister. Earlier, Nawaz strongly condemned the terrorist attack in Bannu and prayed for early recovery of the injured and courage for the bereaved families.- Dailytimes