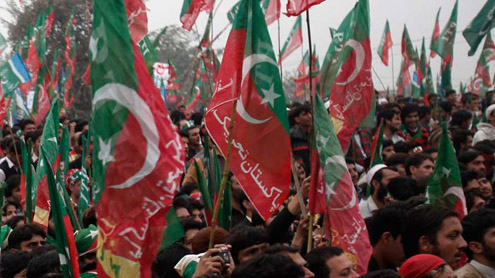 PESHAWAR: When the Khyber Pakhtunkhwa government’s top development committee meets this week to consider some new projects, including those funded by foreign donors, its decisions will not bear the imprint of the ruling Pakistan Tehreek-i-Insaf’s dharna (sit-in) politics, according to the relevant officials.

These officials told Dawn that the Provincial Development Working Party (PDWP) was scheduled to meet Dec 4 to discuss, review, and approve over two dozen new development projects, which made part of the provincial government’s annual development programme for the current financial year. They said the fate of new foreign-funded programmes, from among the proposed projects to be discussed at the PDWP meeting, would not be impacted by the PTI’s ongoing blockade of Nato supplies to Afghanistan via the province.

“Such things (sits-in) do not impact the international donors’ decisions unless our own government takes an extreme position and declines development assistance,” said an official. Since the ruling PTI and its allies, including Jamaat-i-Islami, have blocked Nato supplies to Afghanistan via Khyber Pakhtunkhwa as part of their opposition to US drone attacks in Pakistan, the fate of foreign-funded programmes in the province forms a question mark for their political adversaries.

The provincial government has already announced that it will continue working with foreign donors and execute projects funded by them as planned despite the ruling parties’ protests against Nato supplies. There are, at least, 11 new foreign-funded projects, which await the PWDP approval. The total cost of these projects comes to over Rs36.2 billion.

Addressing a UNDP conference in Peshawar, Mr Marc hinted at the continuation of the UNDP cooperation to the Khyber Pakhtunkhwa government and said more donors would join his organisation soon. He, however, in a veiled suggestion advised it to work with other actors at provincial and national levels. A majority of foreign-funded projects in Khyber Pakhtunkhwa are being run through grants from countries that make part of or are allied with Nato.

Out of the Rs118 billion ADP for the current fiscal, the provincial government will raise Rs83 billion from its resources, while the rest will come from multiple donors, including DFID, JICA, SDC, USAID, NORAD, World Bank, UNDP and ADB. Of this amount, Rs30.6 billion is in grants and Rs4.4 billion in loans. “They (international donors) make their policies by keeping in mind their long-term objectives,” said an official.

He said PTI’s protests would not affect donors’ plans for Khyber Pakhtunkhwa. According to him, Europeans and Americans want to spend money in Khyber Pakhtunkhwa as they know the province needs financial help to manage socioeconomic and security crises.

“Their eyes go where we can’t look at,” said another official.According to him, international donors agencies not only consult the federal and the provincial governments before agreeing to provide money to cater local development needs, they coordinate with each other as well to determine the actual needs and avoid duplication of their effort, making optimal use of their money and energies. The United Kingdom’s Department for International Development and European Union are making multibillion rupees investment in Khyber Pakhtunkhwa’s education sector reforms and health services improvement.

Among the 11 new development initiatives to be launched after the PWDP approval, major works are focused in elementary and secondary education, governance, peace building and strengthening rule of law. According to officials, Khyber Pakhtunkhwa’s real issue in terms of carrying out development activities is not mobilising financial resources and rather, it is the lack of capacity on part of the provincial development agencies. -dawn