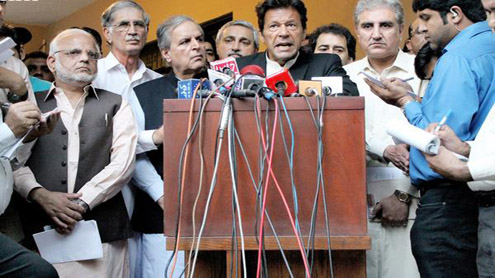 In Peshawar‚ PTI and Jamaat-e-Islami workers set-up protest camp at Ring Road near Hayatabad toll plaza. PTI chief Imran Khan announced that his party government in KPK would officially block the NATO supply line in the province from Wednesday.

On the other hand, the PTI and JI workers carried on their protests by setting up camps at major highways of the province where they stopped vehicles carrying goods for US-led NATO troops in Afghanistan. Protest camps have been set up since Saturday at five major highways in KPK, including Ring Road in Peshawar’s Hayatabad, Khaira bad Bride in Noushera, Indus Highway Chowk in Bannu, Charsadda Interchange and Kohat’s Indus Highway.

Supporters of PTI and Jamaat-e-Islami are present at the protest camps and checking identification documents to distinguish Nato trucks from regular cargo carriers. “We have not forgotten our promises as elimination of corruption and restoration of peace is our top priority,” Khan spoke to media in Lahore. -Onlinenews