The $120,000 Farmhouse where Hakimullah Mehsud Died 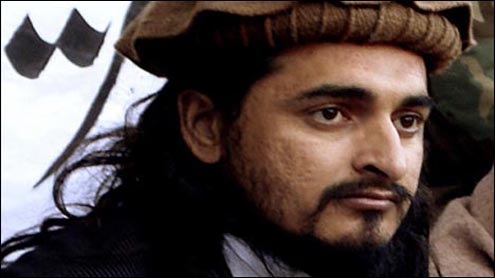 MIRANSHAH: With marble floors, lush green lawns and a towering minaret, the $120,000 farm where feared Tehreek-e-Taliban Pakistan (TTP) leader Hakimullah Mehsud died in a US drone strike was no grubby mountain cave.

Mehsud spent his days skipping around Pakistan’s rugged tribal areas to avoid the attentions of US drones. But his family, including two wives, had the use of an eight-roomed farmhouse set amid lawns and orchards growing apples, oranges, grapes and pomegranates. As well as the single-storey house, the compound in Dandey Darpakhel village, five kilometres north of Miranshah, was adorned with a tall minaret – purely for decorative purposes.

Militant sources said the property in the North Waziristan tribal area was bought for Mehsud nearly a year ago for $120,000 – a huge sum by Pakistani standards – by close aide Latif Mehsud, who was captured by the US in Afghanistan last month. An AFP journalist visited the property several times when the previous owner, a wealthy landlord, lived there. With the Pakistan Army headquarters for restive North Waziristan just a kilometre away, locals thought of Mehsud’s compound as the “safest” place in a dangerous area.

Its proximity to a major military base recalls the hideout of Osama bin Laden in the town of Abbottabad, on the doorstep of elite military academy. “I saw a convoy of vehicles two or three times in this street but I never thought Hakimullah would have been living here. It was the safest place for us before this strike,” local shopkeeper Akhter Khan told AFP. This illusion of safety was shattered on Friday when a US drone fired at least two missiles at Mehsud’s vehicle as it stood at the compound gate waiting to enter, killing the Pakistani Taliban chief and four cadres.

The area around Dandey Darpakhel is known as a hub for the Haqqani network, a militant faction blamed for some of the most high-profile attacks in Afghanistan in recent years. Many left the area during the Taliban’s rule in Afghanistan, coming back after the US-led invasion following the 9/11 attacks. Samiullah Wazir, a shopkeeper in the area, told AFP he would regularly see a convoy of four or five SUVs with blacked-out windows leave the compound early in the morning and return after sunset.

“We thought that somebody very important must be living in this house,” Wazir said. “One day, I saw a man wearing a white shawl entering the house and I thought he looked like Hakimullah, but I thought ‘How can he live here because he could be easily hit by a drone strike?’” But Hakimullah it was and on Friday he returned to his compound for the final time. “We were closing the shop when his vehicle came and was about to enter the house when a missile struck it,” Wazir said. “Moments later, an army of Taliban came and they cordoned off the area. -Dailytimes