by top3
in Khyber Pakhtunkhwa
0 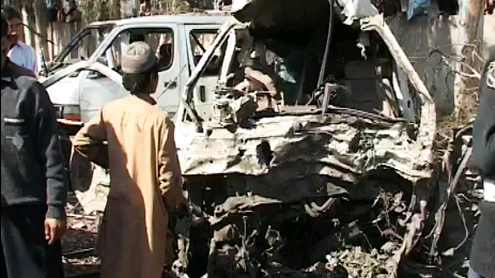 “Around 25 passenger vans were destroyed in the bombing,” Peshawar District Coordination Officer (DCO) Siraj Ahmed told the media after the “remote-controlled” car-bomb exploded. The DCO said that passengers from Darra Adamkhel, Kohat, Hangu, Karak and Bannu used the bus terminal.

Chaos followed the blast, as people from nearby localities rushed to the site help in relief and rescue efforts, witnesses said. “It was a huge blast, heard far off,” said Dilawar, a shopkeeper.

“Initial findings suggest that around 45 kilogrammes of explosives were used in the attack.”

He said the bomb was apparently remote-controlled, as no body parts were found to indicate a suicide bomber carried out the attack. The explosion comes just days after a federal intelligence agency warning that vehicle-borne improvised explosive device (IDE) attack was likely in the city. However, the target was not specified in the report, a senior police official told Daily Times on the condition of anonymity.

It is not clear whether it was a targeted attack, or just a random activity to create chaos in order to put pressure on the government to stop action against terrorist organisations in neighbouring Khyber and Orakzai regions.

“It seems that today’s bombing was a reaction to the action being taken against terrorists,” Peshawar Capital City Police Officer Imtiaz Altaf said, adding that it was one of the worst attacks the city had witnessed over the past year. – Dailytimes