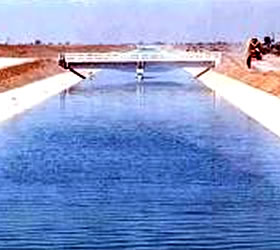 However MPA Israrullah Khan Gandapur from DI Khan termed the ordinance as unconstitutional and against the rights of the citizens and urged the government to refrain from the legislation.

Israr opined that with the passage of the law, the government will violate article 23 of the constitution which has allowed all the citizens of Pakistan to acquire and purchase property in any part of the country.

The ordinance, he said will cancel land transfers in DI Khan which had been done from 1995 to 2000 and will prohibit sale and purchase of the property at the site of the project till its completion or for a period of 15 years.

PPP parliamentary leader Abdul Akbar Khan also opposed the amendment and said that the government has no right to cancel the land transfers besides grabbing the public property.

Minister for Revenue Syed Murid Kazim said the ordinance will stop the land mafia to purchase land at through-away prices in the area.

Law Minister Arshad Abdullah in support of the ordinance said it is not against the basic rights and will protect the poor people of the district from land grabbers.

Later Bashir Bilour suggested that the MPA from Dera should not oppose the ordinance and allow the government to bring it in the house adding that his proposals could be included.

But Israrullah said he will not want to be part of the illegal legislation therefore asked the speaker to put his dissenting note to vote, which was turned down by majority of lawmakers.

Later the law minister presented the ordinance in the house. – PPI -statesman