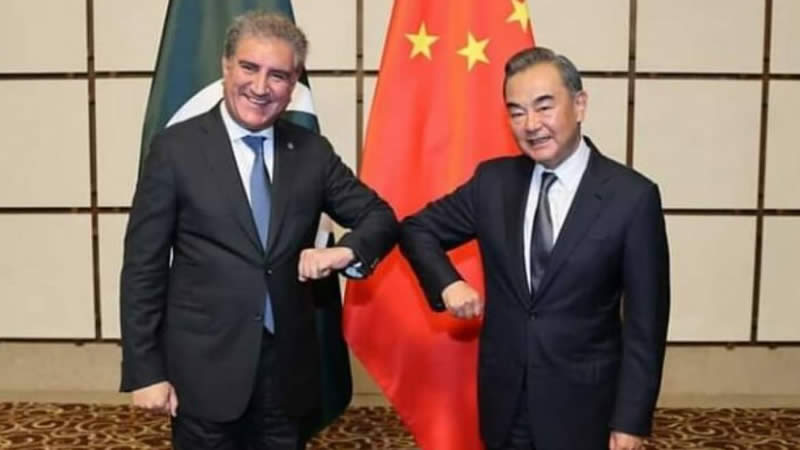 Pakistan and China on Thursday decided to deepen their cooperation and work together for peace and stability in the region.

This was agreed between the two countries during a telephone conversation between Foreign Minister Shah Mahmood Qureshi and his Chinese counterpart Wang Yi, which continued for an hour.

The conversation, the Foreign Office said, was arranged to “reaffirm the depth and breadth” of bilateral ‘All-Weather Strategic Cooperative Partnership’ and exchange views on Covid-19, bilateral relations, and regional and international issues of mutual interest.

“Both foreign ministers agreed to maintain strategic communication and consultation, at all levels, to promote mutual goals of peace and stability in the region and beyond, and expressed commitment to further strengthening all-round cooperation and taking the bilateral relationship to a higher level for shared benefit of the two countries,” said the statement.

It was being expected that Chinese President Xi Jinping would visit Pakistan in the early part of 2021. However, it now appears that the trip may not happen in the coming months as FM Qureshi has been invited to visit Beijing for “maintaining momentum of high-level exchanges”. Mr Qureshi has accepted the invitation.

“Foreign Minister Wang Yi expressed satisfaction over Pakistan and China’s cooperation on regional and international issues and reaffirmed the vitality of the time-tested All-Weather Strategic Cooperative Partnership which remained unaffected by the vicissitudes of the regional and international developments and continued to move from strength to strength,” the FO said.

Talking about efforts to deal with Covid-19, Mr Qureshi recalled the bilateral mechanisms in this regard and said they were playing a useful role in controlling the pandemic, resuming economic growth and restoring supply chains across the region.

Mr Qureshi informed his counterpart that Phase-III trials of Covid-19 vaccine produced by Chinese firm CanSino were progressing well in Pakistan. He, moreover, told him that his government had approved another Chinese vaccine of Sinopharm for emergency use in Pakistan and hoped for its early availability from China.

The government has announced its decision to procure 1.2 million doses of the vaccine from the Chinese state-controlled firm.

Mr Wang assured Mr Qureshi that China would provide over one million doses of the vaccine to Pakistan for emergency use.

“The foreign minister also emphasised that Pakistan and China must continue to closely coordinate efforts to advance the shared objectives of peace, stability and economic development in Afghanistan,” it added.

Mr Qureshi described the China-Pakistan Economic Corridor as a “transformational project”, and hoped that BRI and CPEC would become “the hub of trade and economic activity, sustainable development and greater people-to-people exchanges”.

He said both countries were taking measures for timely completion of CPEC projects. He said the 10th JCC meeting, which would be held shortly, would play an instrumental role in taking CPEC further.