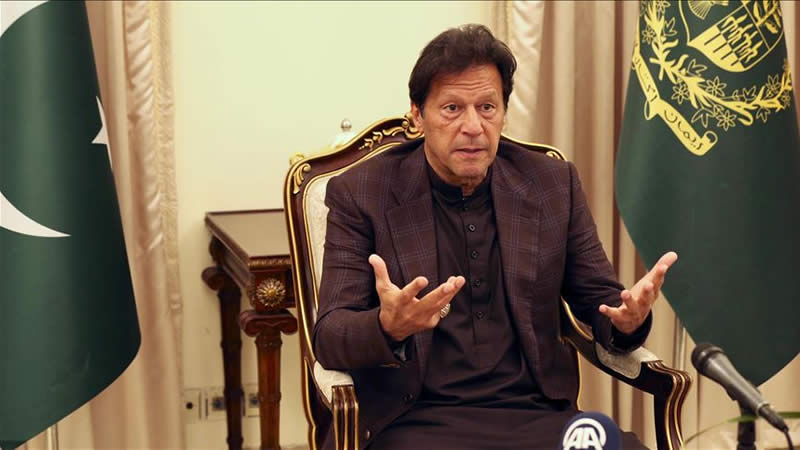 “Nawaz has committed the highest treason by targeting military leadership which is tantamount to incite mutiny in the armed forces,” the premier said in an interview with a local TV channel Thursday night.

“How all of a sudden Nawaz who was brought into politics by military dictator General Ziaul Haq became champion of democracy and Indian media is portraying him as a hero,” he added.

When asked about the evidence, PM Imran said intelligence agencies had information about Nawaz’s links with India. “We cannot sue Nawaz on the basis of intelligence reports because they are not acceptable as evidence in the courts.”

Speaking about the ‘Karachi Incident’— the events surrounding the arrest of opposition leader Capt (retd) Mohammad Safdar in Sindh’s provincial capital, the prime minister said it had benefited his rival party – PML-N.

“If I were there I would have not taken action against them because this would overshadow their other crimes which are far more serious,” he added.

The premier also said, “If you put them behind bars over issues like these it will help them [to gain sympathies].”

The premier’s response comes two days after the Pakistan Army had announced the removal of its officials involved in interfering into the affairs of the Sindh police.

“The Court of Inquiry has established that on night 18 / 19 Oct officers from Pakistan Rangers (Sindh) and ISI sector Headquarters Karachi were considerably seized with the fallout of desecration of Mazar-e-Quaid,” the military’s media wing said in a statement. “They were under increasing public pressure to ensure prompt action as per the law,” it added.

“Assessing the response of police authorities against this developing yet volatile situation to be slow and wanting, in a charged environment, the ISI/Rangers concerned officers decided to act, rather overzealously. They were indeed experienced enough to have acted more prudently and could have avoided creating an unwarranted situation that led to misunderstanding between the two state institutions.”

On the opposition’s newly-formed 11-party alliance the Pakistan Democratic Movement (PDM), PM Imran was of the view that their only aim was to get relief in corruption cases by pressurising his government.

The prime minister while rejecting the allegation of political victimisation on the pretext of corruption cases said: “We did not make a single corruption against them except TT [telegraphic transfer] case against Shehbaz Sharif… all corruption cases were lodged during the tenure of opposition parties.”

Giving an example of 1MDB corruption scandal, he said that in the country like Malaysia it took their authorities almost two and a half years to sentence the former prime minister Najib Razak over corruption charges. “It will take time but I can assure you that I won’t spare corrupt leaders and recover all looted national wealth.”

In his opening remarks, PM Imran said that he was “fully satisfied” with the performance of his government while admitting that his government could have performed better on economic front if it had not delayed the decision about availing the International Monetary Fund (IMF) economic support programme. “It created confusion and caused loss to economy.”