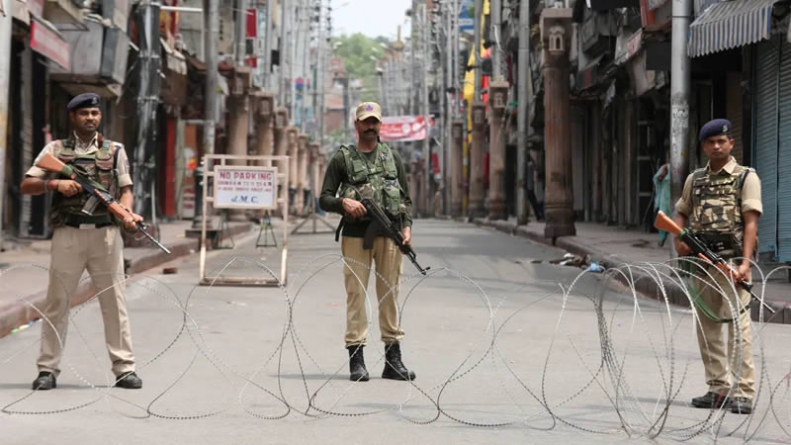 Pakistan and India on Thursday put the onus on each other for creating an enabling environment for normalising ties.

The Foreign Office said: “The onus is on India to create an enabling environment by rescinding its illegal and unilateral actions, ending its state-terrorism against the Kashmiri people, and agreeing to resolve the Jammu & Kashmir dispute in accordance with international legitimacy”.

The debate on who needs to move for resumption of normal ties was set off by Indian Minister of State for External Affairs V. Muraleedharan’s statement in Rajya Sabha, the upper house of the bicameral parliament of India, in which he said the “the onus is on Pakistan to create such a conducive atmosphere”.

Bilateral dialogue between the two countries has been suspended since 2013.

Meanwhile, the level of representation in each other’s country has been lowered for over a year now following the annexation of occupied Kashmir by India last year. The two countries also halved the size of their respective diplomatic missions in the two countries in June this year after a dispute over a road accident involving Indian High Commission staff in Islamabad.

Tensions between the two countries, especially on the Line of Con­trol, have moreover remained high.

“It is India that has vitiated the atmosphere with its illegal and unilateral measures of 5 August 2019 in IIOJK and with continuous belligerent rhetoric,” the FO said.

The statement reiterated Pakistan’s conditions for a bilateral re-engagement — India ending its “illegal and forcible occupation of parts of Jammu and Kashmir and complying with its international obligations”. India, it said, is obligated by its international commitments to give Kashmiris their inalienable right to self-determination through a free and impartial plebiscite under the auspices of the United Nations as enshrined in the relevant UN Security Council resolutions.

The Indian minister, meanwhile, said Pakistan could create an enabling environment for ties’ revival by taking “credible, verifiable and irreversible” action to prevent its territory from being used against India.

Muraleedharan said India had regularly raised concerns about Pakistan at bilateral, regional and multilateral platforms because of which the world is now alert to activities of internationally designated terrorist entities and individuals like Jamaatud Dawa, Lashkar-e-Taiba, Jaish-e-Moham­mad and Hizbul Mujahideen from Pakistan.

Rejecting the Indian allegation, the FO said: “With its gross and systematic human rights violations and state-terrorism in Indian Illegally Occ­upied Jammu and Kashmir (IIOJK), India cannot mislead the wor­ld community by levelling unfo­unded allegations against others”.