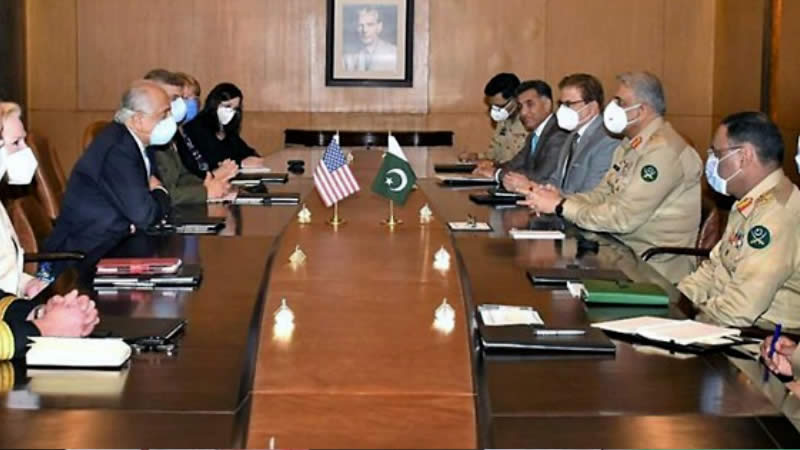 With the United States seeking continued support for peace in Afghanistan, Chief of the Army Staff (COAS) Gen Qamar Bajwa on Monday credited Prime Minister Imran Khan for Pakistan’s role in the start of intra-Afghan talks.

The COAS was talking to US Special Representative for Afghan Reconciliation Zalmay Khalilzad, who was visiting Pakistan along with his delegation.

Mr Khalilzad’s latest trip to Pakistan came a day after the start of long-delayed dialogue between the warring Afghan factions in Doha. The talks kicked off with a high-profile ceremony that was, besides the Afghan government and Taliban delegations, attended by US Secretary of State Mike Pompeo, chairman of Afghan High Council for National Reconciliation Abdullah Abdullah, Qatari Foreign Minister Sheikh Mohammed bin Abdulrahman Al Thani, and senior diplomats from several countries.

At the inaugural ceremony, a number of European countries praised Pakistan for its contributions to the peace process.

Secretary Pompeo had at the ceremony thanked Qatar for its support and said his country “will never forget the solidarity of our many allies and partners who have stood with us in the long struggle to end this war”.

The Inter-Services Public Relations, the military’s media affairs wing, said Mr Khalilzad “greatly appreciated” Pakistan’s role in the ongoing peace process saying “it could not have succeeded without Pakistan’s sincere and unconditional support”.

Pakistan says it facilitated the US-Taliban agreement signed in February, got the warring sides to observe ceasefire on Eid, and helped break the stalemate over the prisoners’ release that had been delaying the start of the intra-Afghan dialogue.

Gen Bajwa said: “Prime Minister Imran Khan has given clear vision regarding peace and connectivity in the region and all elements of national power are united towards making that vision a reality to ensure long-awaited peace, progress and prosperity in the region.”

In a statement on Mr Khalilzad’s trip, the US embassy said he “stressed the need for ongoing regional and international support for this historic opportunity for peace”.

Prime Minister Khan in his statement on the start of the talks had said Pakistan had fulfilled its role for peace in Afghanistan though he assured that his government would continue to support the peace process.

It is believed that despite the stated commitment of all countries to an Afghan-owned and Afghan-led process, external support would be required for the dialogue to succeed.

Till Sunday night, the talks in Doha had focused on “the schedule and principles for the upcoming meetings,” to quote Taliban’s political office spokesman Dr Mohammad Naeem. They still had not begun discussing the contentious issues. Getting a ceasefire is likely to pose the biggest challenge to the progress of the dialogue.