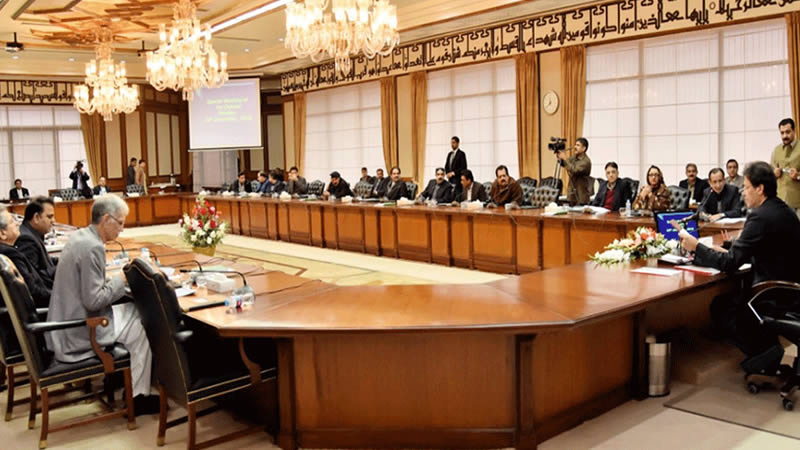 A rift between the Centre and Sindh may worsen after the federal cabinet decided against releasing funds directly to the provincial government for the victims of the flood- and rain-hit areas.

Instead, the federal government will utilise the funds itself.

The decision was taken during the meeting of the cabinet presided over by Prime Minister Imran Khan on Tuesday.

“We cannot give even a penny to Sindh for the flood victims unless we are told about the exact losses,” Information Minister Shibli Faraz said during a press conference after the cabinet meeting.

The prime minister had visited Karachi last week and in the presence of Sindh Chief Minister Murad Ali Shah unveiled the Rs1.1 trillion package at the Governor House for Karachi’s chronic issues, including provision of clean drinking water, cleaning of drains and sewage and solid waste disposal within three years.

Later, PPP Chairman Bilawal Bhutto Zardari stated that the Sindh government would contribute Rs800 billion to the Rs1.1tr package for Karachi, saying that they “welcome the Rs300 billion funding from the federal government for Karachi’s infrastructure development”.

On Sunday, however, federal Minister for Planning and Special Initiatives Asad Umar of the PTI along with federal IT and Telecom Minister Aminul Haque of his party’s coalition partner MQM-Pakistan and Maritime Affairs Minister Ali Zaidi held a press conference at Governor House where no PPP representative was present.

Mr Umar said he got messages from different people soon after the unveiling of Karachi package that the PPP had claimed that the Sindh government would bear the lion’s share.

“Sindh Chief Minister Syed Murad Ali Shah had in a meeting agreed not to reveal the share of both the governments (federal and provincial), he said.

The federal minister said it was necessary to set the record straight and claimed that the federal government would bear 62pc of the total amount of Rs1,100 billion announced by the prime minister for Karachi Transformation Plan(KTP), while the remaining 38pc will be spent by the provincial government.

He said the funds to be allocated for the flood victims in Sindh would be separate from the amount recently announced by the prime minister for the Karachi Transformation Plan (KTP).

On the other hand, Sindh government spokesman Murtaza Wahab accused the federal government of giving peanuts in the name of KTP.

In a statement, Mr Wahab claimed that out of Rs1.1 trillion allocated for KTP, the centre would provide only Rs362 billion while the remaining amount would be spent by the Sindh government.

“The federal government has, in fact, given a lollypop to the people of Karachi,” he said during a press talk.

Meanwhile, the prime minister, while addressing the meeting, said Karachi was playing a role of an “engine of growth” for the country’s economy, and therefore the federal government would utilise all possible resources to overcome the problems confronting the metropolis.

The cabinet decided to shut down 2,800 megawatts (MW) state-run power plants which were incurring losses.

During the press conference, the information minister said, in the first phase 1,479MW power plants were being closed while those generating 1,460MW would be shut down by the end of the current month.

He said the National Electric Power Regulatory Authority presented its annual report for the year 2018-19 as well as the State of Industry Report 2019 before the cabinet.

The meeting directed that a strategy be devised in light of the recent agreement between the Independent Power Producers and the government so that its benefits could be passed on to the people.

The cabinet was informed that the government had released Rs1.6 billion outstanding dues to media houses and hoped that they would pay the pending salaries of their staff.

The meeting also gave approval to expand the purview of the cabinet committee on legislation.

The meeting took another important decision, approving a proposal for setting up two additional terminals of Liquefied Natural Gas at Karachi Port.

The cabinet also tasked the National Disaster Management Authority to join heads with all provincial governments to determine exact losses the country suffered during the recent torrential rains and floods.