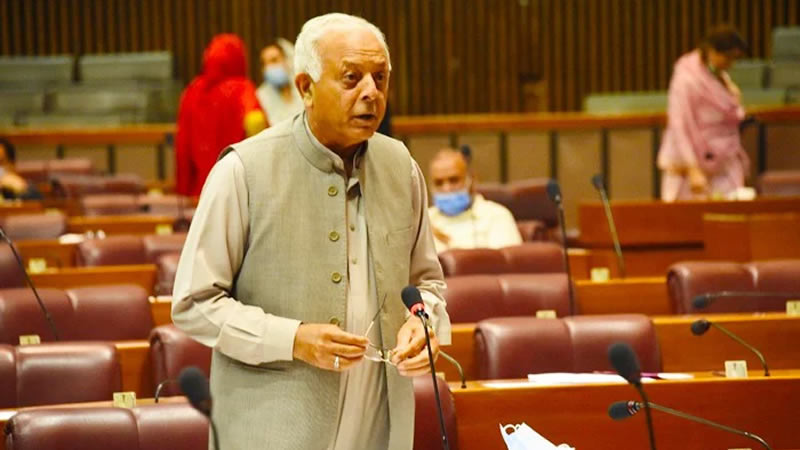 The National Assembly on the opening day of its first post-budget session on Wednesday witnessed a heated exchange of arguments between the opposition members and Aviation Minister Ghulam Sarwar Khan over the issue of the ‘dubious licences’ of the Pakistani pilots after the latter was blamed for bringing humiliation to the country at the international level by making such a disclosure.

The minister, on the other hand, alleged that the governments of the Pakistan Muslim League-Nawaz (PML-N) and the Pakistan Peoples Party (PPP) had recruited 658 employees, including pilots and engineers, having fake academic degrees and dubious licences between 2008 and 2018.

The house also witnessed rumpus when the opposition members protested over the minister’s remarks that former prime minister Nawaz Sharif was “among the top 10 most corrupt” rulers of the world who was even supplied food through PIA planes.

The legislators also debated the issues of minorities’ rights with respect to ongoing campaign against them on social media and the construction of a Hindu temple in Islamabad and the frequent power outages in Karachi due to alleged high-handedness of the K-Electric.

Minister for Human Rights Dr Shireen Mazari assured the house that her ministry would take action against those involved in the social media campaign against the minorities.

She introduced the Domestic Violence (Prevention and Protection) Bill, 2020, seeking “to establish an effective system of protection, relief and rehabilitation of women, children, elders and any vulnerable person against domestic violence”.

The issue of the pilots’ licences came under discussion when the house took up a calling attention notice of the PML-N members on “the suspension of authorisation for the PIA by the European Union Air Safety Agency (EASA) and UK’s authorities to operate in Europe for six months”.

Presenting the preliminary investigation report of the May 22 plane crash in Karachi on the floor of the assembly on June 24, the aviation minister had disclosed that there were 860 active pilots in the country, and 262 of them had appeared in exams through proxies. He had stated that almost 30 per cent of the pilots had fake or improper licenses and did not have flying experience either.

The minister’s statement alerted the international aviation agency and a number of foreign airlines grounded Pakistani-origin pilots. And on July 1, the EUASA and UK’s authorities stopped PIA from flying to Europe for six months.

Responding to the calling attention notice, the minister downplayed the suspension of the PIA operation, terming it “temporary” and saying it was not for the first time that such a ban had been imposed on the national airline. He recalled that in the past on a number of occasions, the PIA had faced suspensions for not adhering to the safety measures.

He said they were in contact with the concerned authorities in Europe and would be having a video conference on the issue on Friday as well. Asking the opposition not to make hue and cry, he said the other countries would be satisfied when they would ‘clean’ the institutions from corruption. He alleged that jobs were put on sale during the previous governments of PML-N and PPP.

Mr Khan dispelled the impression that they had started verifying degrees and licences of the pilots after the May 22 plane crash, saying the process had been initiated in February last year in the light of the Supreme Court’s order.

He said they had so far detected 658 PIA employees, including 28 pilots and 96 engineers, who possessed fake degrees. One of the engineers, he alleged, was only matric as his FSc and BSc certificates were found to be fake.

Mr Khan said action had already been taken against 54 pilots and “suspension letters” were being issued to another 34 pilots.

Responding to the problems being faced by Pakistani pilots working in other airlines, he said the government was in contact with the authorities and the foreign airlines had sent them the lists of the pilots for verification. He said the UAE had sent a list of 54 pilots and they had already cleared 48 of them. Similarly, he said, nine out of 11 pilots working in Vietnam Airlines had also been cleared. He said the process of verification of the lists provided by Malaysian Air and Turkish Airlines were under scrutiny.

Murtaza Javed Abbasi of the PML-N alleged that the minister had made the statement about the pilots’ licences in haste and thus brought about a bad name for the country.

At the outset, PML-N’s parliamentary leader Khawaja Asif while speaking on a point of order said a “planned campaign against minorities” was being run on social media in retaliation to the Indian atrocities against Muslims in occupied Kashmir.

“If minorities don’t feel safe in Pakistan then it is a matter of shame for us. It is our responsibility to protect their places of worship,” he said while claiming that some objectionable caricatures had been made on social media targeting the minorities.

Maulana Abdul Akbar Chitrali of the Jamaat-i-Islami said it was their responsibility to protect the worship places of minorities which already existed in the country, but there was no room for building a temple in the capital with public money.

Giving a policy statement on the issue, Minister of Religious Affairs Noorul Haq Qadri said there was “no question” about the construction of temple but the real issue was whether or not it could be built using public funds.

He said a few minority MNAs had contacted him and said they had acquired four-kanal of land for the temple and asked him to arrange funds for its construction.

“I told them that I had limited funds for renovating existing places of worship and can’t arrange such a large sum. On the request of the members, the matter was referred to the prime minister and there has been no progress in this regard,” the minister said, adding that the matter had been sent to the Council of Islamic Ideology.

Coronavirus May Never go Away: WHO

China says would Join Nuclear talks if US Reduces Arsenal

China says would Join Nuclear talks if US Reduces Arsenal