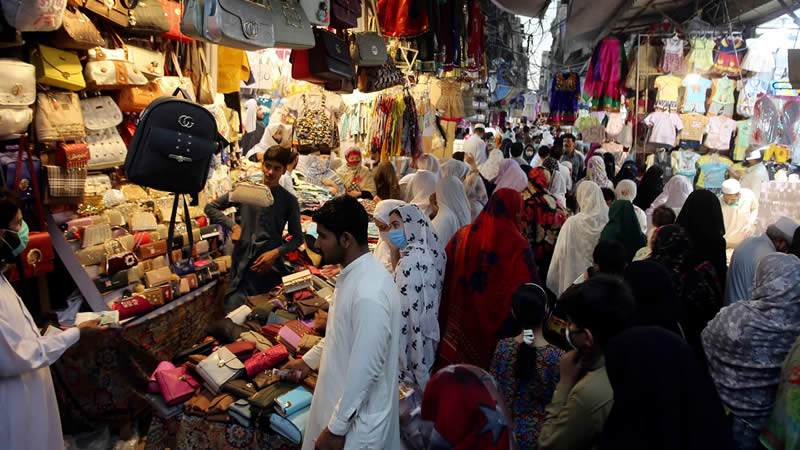 Minister for information and Broadcasting Senator Shibli Faraz said on Tuesday that the number of deaths from coronavirus in the country increased because the people ignored the government’s standard operating procedures (SOPs) issued to curb the spread of Covid-19 pandemic before Eid.

In a post-cabinet meeting press conference, the minister, while holding the general public responsible for the rising number of Covid-19 deaths, said that the SOPs were especially neglected during the Eid shopping.

“When the government eased restrictions, it also issued SOPS and advised the people to adopt precautionary measures and practise social distancing but unfortunately the people neglected the directives, especially during Eid shopping,” the minister told reporters.

“If the masses start following the SOPs, the increase in the coronavirus cases could be reduced to half,” he added, urging the masses to adopt precautionary measures as it would help keep the wheels of the economy turning and save the vulnerable from starvation.

In addition, the minister said, the provinces had been given complete authority to impose strict lockdowns in the areas considered hotspots of the virus. He added that fines and punishment would be imposed on the violators.

While sharing the details of cabinet meeting, Faraz said that the cabinet gave approval to the ECC decisions in its meeting held on June 10, which included risk allowance for the healthcare workers and approval of the Electric Vehicle policy for 2-3 wheelers.

The ECC had also allowed duty-free import of wheat besides banning its export as the federal and provincial departments could procure 80% of the target set for the staple commodity amid soaring prices.

In addition, Faraz said, the ministers discussed the issue of high-rise buildings near the airports. He said that the cabinet was informed that NOC had already been issued to 62% areas located near airports in Islamabad, Karachi, Lahore, Peshawar and Multan.

The cabinet heard that the Pakistan Civil Aviation Authority had been tasked with issuing notification regarding the height of the buildings near airports but the process was delayed because of coronavirus pandemic. The cabinet, while directing the authorities concerned to complete aeronautical study, granted time till July 31, 2020.

The cabinet also gave approval for setting up Covid-19 fund under the Public Account of the Federation maintained by the State Bank of Pakistan (SBP ) regarding the remaining amount of Rs1.2 trillion allocated for coronavirus relief activities so that the amount would not lapse in the next fiscal year.

Also, Faraz said, the cabinet unanimously approved a draft law for the protection of the rights of children working as domestic help. Faraz said that the cabinet approved the price for an injection, which is being used for the treatment of the Covid-19 patients– Remdesivir. He said that no duty would be imposed on its import.

The cabinet also decided to resume phase-wise international flights for repatriation of overseas Pakistanis. During the meeting, relevant authorities were directed to make an ‘action plan’ regarding flight operations to bring back the stranded Pakistanis from across the world, especially the Middle East.

Faraz said that the government had simultaneously been making efforts to save the people’s lives and the economy. He added a comprehensive plan was being pursued in collaboration with the National Command and Operation Centre (NCOC) and all the relevant departments.

According to the press statement issued following the briefing, Faraz said that the government had devised a proactive strategy to contain and prevent the spread of coronavirus pandemic, keeping in view the country’s economic situation as well as the ground realities.

In the cabinet meeting, the statement added, Prime Minister Imran Khan talked about the issue in detail and emphasised that the PTI government had a clear-cut policy on handling the outbreak of coronavirus cases.

Faraz said that some people had been criticising the government policy but they should realise that Pakistan could not afford long-term complete lockdown due to ground realities as the country had to save the poor segments of society from hunger.

The minister told reporters that the country’s economy and the healthcare system could not be compared to that of the United States or Europe, yet even their healthcare systems collapsed because of the virus spike.

Subsequently, he added, when neighbouring India imposed a strict lockdown, there were only 635 confirmed cases but when it eased the restrictions the cases reached 198,000, which suggested that lockdown policy was a failure. He said that due to lockdown Indian economy suffered and the infection rate also spiked.