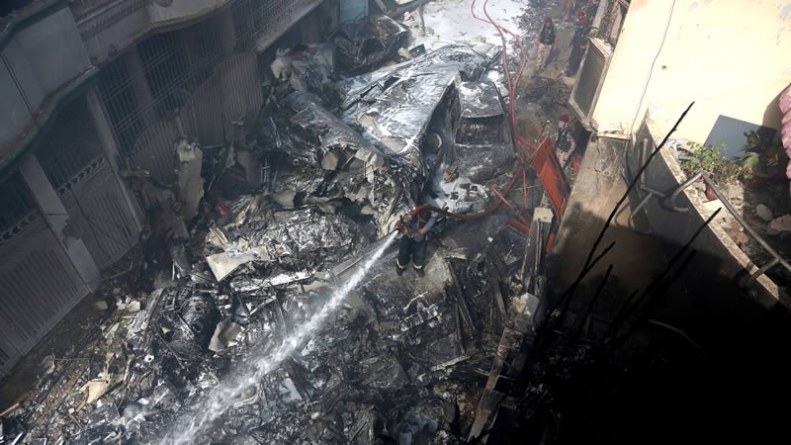 The government has sought an explanation from the Civil Aviation Authority (CAA) for writing a letter to the Pakistan International Airlines (PIA), which suggested the pilot of the airliner that crashed near Karachi airport last month did not follow the instructions of air-traffic controllers (ATC), saying this was the kind of information that had to be provided to the inquiry board.

“We have sought an explanation from the CAA official (for writing a letter to PIA implying that the pilot of the PK-8303 flight did not follow the instructions of ATC). As long as the inquiry report is not finalised, the official in question should not have spoken up (publicly). Whatever the official/CAA had to say should have been told to the four-member inquiry board probing the crash,” said Minister for Aviation Ghulam Sarwar Khan at a press conference on Thursday.

He was visiting the provincial capital to condole with the families of the PIA crew members who lost their lives in the air crash on May 22 that claimed the lives of 98 people.

The minister said that perhaps the CAA thought whatever was written in the letter was correct. “However, an explanation has been called in this regard,” he added.

The June 2 letter sent by CAA official Iftikhar Ahmed to the PIA’s safety and quality assurance department, while pointing out “non-compliance of ATC instructions” by the pilot of the ill-fated aircraft, had asked it to ensure that such a situation was not repeated in future.

Sarwar Khan said that only three bodies of the plane’s passengers had yet to be identified for different reasons, like DNA not being matched.

He said that one girl on the ground also lost her life, while two others suffered burn injuries and had been given compensation amounts.

The minister said the cockpit voice recorder and flight data recorder were with the French team that visited Pakistan and data from the two recorders had successfully been downloaded. The government would make the preliminary report about the crash public on June 22.

“The plane crash will also be discussed in the forthcoming session of the National Assembly and we assure everyone that the probe will be fair and transparent,” he said, dismissing criticism of members of the inquiry board.

The release of the preliminary probe report on the Karachi incident would be followed by release of reports on the Chitral crash, Gilgit crash-landing, and crashes of the planes of Air Blue and Bhoja Air in Islamabad, he added.

Turning to the financial health of PIA, Sarwar Khan said: “The PIA planned to take its fleet from the existing 31 to 45 aircraft by 2023. But due to the coronavirus pandemic, the aviation industry has suffered a lot and the national flag carrier has been under a debt of Rs482 billion.”

On the issue of bringing back the Pakistanis stranded abroad, he said: “Although PIA has started special flights to bring them back from places in Africa, Australia and the US, where it does not operate direct flights, over 100,000 people are still waiting to return home. They have registered themselves with the Pakistani embassies and we will soon bring them back through special flights.”

Although the reporters were requested by the officials accompanying the minister not to talk about the National Accountability Bureau’s (NAB) inquiry about his assets, Sarwar Khan was nevertheless pressed to explain its status. “I welcome the NAB probe and want it (bureau) to investigate other cabinet members too. But at the same time, I will ask it to investigate the affairs of those who remained prime minister and chief minister for three times,” he said in response.