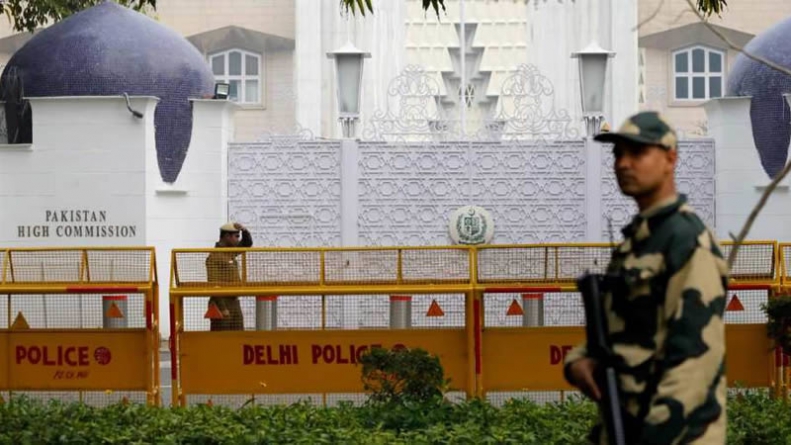 India on Sunday ordered the expulsion of two Pakistani diplomats posted in New Delhi after declaring them as persona non grata, a move immediately condemned by Islamabad, calling it a clear violation of Vienna Convention on diplomatic relations.

The Indian move came as tensions between the two nuclear-armed neighbours are already high and the latest development will further deepen the crises.

The Indian External Affairs Ministry claimed that the two diplomatic staff members of the Pakistani mission were apprehended by Indian law enforcement agencies for “indulging in espionage activities.” Authorities, however, did not identify the two individuals.

“The government has declared both these officials persona non grata for indulging in activities incompatible with their status as members of a diplomatic mission and asked them to leave the country within twenty-four hours,” read an official handout issued by the Indian foreign ministry, which also summoned the Pakistani chargé d’affaires on the issue.

But within hours of the Indian move, Pakistan reacted sharply and strongly condemned the expulsion of its diplomats.

“The Indian action has been accompanied by a negative pre-planned and orchestrated media campaign, which is a part of persistent anti-Pakistan propaganda,” said a foreign office statement.

The statement said the two staff members of the Pakistan High Commission in New Delhi were lifted by the Indian authorities on Sunday on “false and unsubstantiated charges.”

They were, however, released on intervention by the High Commission.

“We condemn the detention and torture as well as threatening and pressuring of the diplomatic officials to accept false charges,” said Foreign Office spokesperson Aisha Farooqui.

She said Pakistan strongly rejected the baseless Indian allegations and deplored the Indian action which she termed as clear violation of the Vienna Convention on diplomatic relations as well as the norms of diplomatic conduct especially in an already vitiated atmosphere.

“The High Commission for Pakistan in New Delhi has always worked within the parameters of international law and diplomatic norms. The Indian action is clearly aimed at shrinking diplomatic space for the working of Pakistan High Commission,” she added.

Aisha made it clear that the Indian attempts to escalate the tensions will not succeed in diverting attention either from the ongoing internal and external issues faced by the BJP government or from the worsening situation and gross human rights violations being perpetrated by the Indian occupation forces in Indian Occupied Jammu and Kashmir (IOJ&K).

“Pakistan urges the international community to take notice of the Indian designs and play its role in ensuring peace and security in South Asia,” she further said.

Relations between Pakistan and India have already been at the lowest particularly after Pulwama incident that brought the two countries to the brink of war.

The relationship further deteriorated when India in a unilateral move on August 5 revoked the special status of disputed Jammu and Kashmir region. Apart from other measures, Pakistan downgraded diplomatic ties with India by recalling its ambassador from New Delhi and ordered the Indian envoy to leave the country.

The latest episode will further ignite tensions as usually such expulsions are tit for tat. The two countries have a history of declaring each other’s diplomats as persona non grata.

It was conveyed that the Indian action was in clear violation of the Vienna Convention on Diplomatic Relations and the diplomatic norms.