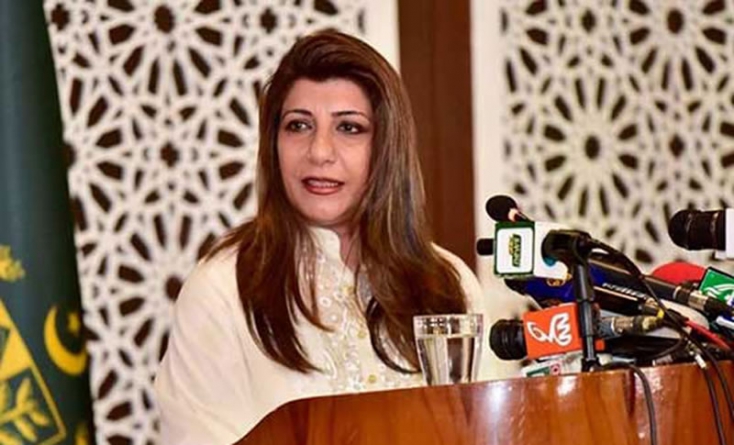 Pakistan has rejected the “irresponsible remarks” by the Indian Ministry of External Affairs on Prime Minister Imran Khan’s tweet condemning the recent Indian steps to illegally change the demographic structure of the India-occupied Jammu and Kashmir.

Foreign Office Spokesperson Aisha Farooqui in a statement here on Sunday said that India’s incessant regurgitation of the claim that occupied Jammu and Kashmir was an “internal affair” would neither turn this falsehood into truth, nor make this illegality legally valid.

“The IOJ&K is an internationally-recognised disputed territory, as enshrined in the relevant United Nations’ Security Council Resolutions. These resolutions stipulate that the final disposition of the State of Jammu and Kashmir will be decided through the democratic method of a free and impartial plebiscite under the UN auspices,” she said

Prime Minister Imran Khan in a series of tweets last week on the newly-enacted Jammu and Kashmir Reorganisation (adaptation of state laws) order 2020 had denounced the new law and expressed solidarity with the people of occupied Kashmir.

“We strongly condemn the racist Hindutva Supremacist Modi government’s continuing attempts to illegally alter the demography of IOJK in violation of all international laws & treaties. The new Jammu and Kashmir Reorganisation Order, 2020, is a clear violation of the 4th Geneva Convention,” Prime Minister Imran Khan had stated

Mr Khan had also accused India of exploiting the international focus on the Covid-19 pandemic to push forward the BJP’s Hindutva supremacist agenda and said that the timing of the enactment of the illegal act was thus reprehensible.

The prime minister also called on the United Nations and countries of the world to stop India’s continuing violations of UNSC resolutions and the international law.

“We stand with the Kashmiris in rejecting this latest Indian attempt to alter the demography of IOJK. Pakistan will continue to expose Indian state terrorism & its denial of the Kashmiris’ right to self-determination,” Mr Khan had declared.

“We have seen the intemperate remarks by Pakistan Prime Minister Imran Khan on India. With regard to the Indian Union Territory of Jammu and Kashmir, it is very clear that Pakistan has no locus standi whatsoever on any aspect pertaining to it,” Mr Kumar stated, adding that “repeated attempts to interfere in India’s internal affairs will not make its untenable claims any more acceptable”.

The Indian external affairs ministry’s spokesman had further said that “if Pakistan really wants to contribute to the welfare of the people of J&K, it could do so best by ending cross-border terrorism and desisting from its campaign of violence and false propaganda”.

On the other hand, Aisha Farooqui responded that no amount of Indian sophistry could obfuscate India’s state-terrorism in IOJ&K and the RSS-inspired Hindutva agenda being imposed by the BJP government.

She said it should also be clear to India that, for their part, Pakistan and its leadership would never flinch in their support for the just and legitimate cause of the Kashmiri people.

Earlier, India, by revoking Article 35-A in Aug 2019 alongside Article 370, had removed the barrier for Indians to buy and own properties in occupied Kashmir. These actions and the latest move to relax domicile and employment criteria are meant to change the demographic status of the occupied territory as non-Kashmiris will flood into the region to diminish the Muslim majority there.

Pakistan had earlier sharply reacted to the revocation of Article 370 and 35-A and carried out an extensive diplomatic outreach. However, apart from expression of concern by a few countries, nothing substantive could be achieved. India, meanwhile, has maintained a lockdown in the occupied valley, which is now in its ninth month.