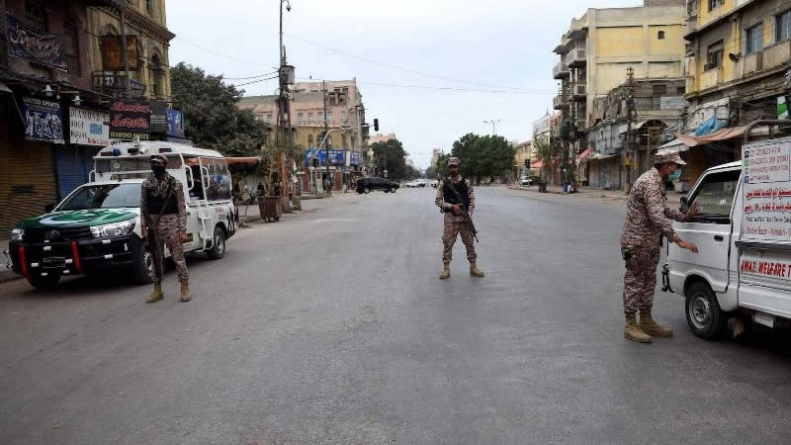 The government on Wednesday decided to extend the restrictions already imposed to prevent spread of coronavirus in the country for another two weeks, up to April 14.

“All units of the country including federal government, and governments of all four provinces, Gilgit Baltistan and Azad Jammu and Kashmir have jointly decided that the current level of lockdown should continue for another two weeks,” Minister for Planning, Development and Special Initiatives Asad Umar said at a press briefing along with Special Assistant to Prime Minister on Health Dr Zafar Mirza and Special Assistant to Prime Minister on National Security Division Moeed Yusuf here after a meeting of the National Coordination Committee (NCC). However, he said, in the meantime, the NCC will keep on monitoring the situation closely and the decision can be revised by either reducing restrictions and period or increasing the restrictions depending on the pace of spread of the virus.

Expressing satisfaction over slow pace of spread of the virus, the minister said that the government’s strategy of imposing current level of restrictions has yielded positive results. “Therefore, we do not need any further restrictions to be imposed at the current stage,” he added. He said the services and industries producing eatables, energy and medicines will be kept open to ensure proper production and supply of the essential items. He said except for some complaints from some areas of the country, all the provinces are fully implementing the decisions of the NCC.

With respect to repatriation of Pakistanis abroad, the minister said the government has decided to run first flight of Pakistan International Airline on April 4, which would carry Pakistani passengers who want to return back to the country. “Passengers will be tested and they will be kept in quarantine facility till the results are received,” he said, referring to the government’s aim to resume flight operations. “If they test negative, then we will ask them for self-quarantine and take necessary precautionary measures,” he said. “On April 5, we will review this measure of bringing people from abroad, if it is successful, then the flights will be started in different airports of the country. However, domestic flights will remain suspended until further orders,” he added.

Special Assistant to Prime Minister on National Health Services Dr Zafar Mirza said 24 more patients have recovered during the last 24 hours, bringing total number to 82. He said as many as 974 confirmed patients are currently admitted to various hospitals, out of which 10 are in critical condition and on ventilator while remaining are in various stages of recovery. He said that there are a total 17,331 suspected patients, with addition of 1,436 patients during the last 24 hours. He said 8,893 people are living in different quarantine centres, out of which tests of 5,198 people have been conducted with ratio of 19% positive cases and 81% negative cases.

He said despite clear directions, some organizations have continued the practice of using biometric for their employees, and asked to stop this practice to control further spread of this virus to others. He said in adoption to strict prevention measures and social distancing policy, while reviewing world’s guidelines and keeping in view the local aspects, the Ministry of National Health Services has decided to issue two guidelines separately for shops and factories. He said the objective behind issuing guidelines is to protect the customers and workers at factories and shops from coronavirus as the government has allowed running of all those shops and factories which are manufacturing or selling necessary items.

Special Assistant to Prime Minister on National Security Division (SAPM) Moeed Yusuf said the National Coordination Committee (NCC) has decided that Pakistan International Airlines (PIA) will operate 17 flights from April 3 to 11 to bring back around 2000 Pakistani from various countries. He said the PIA’s special flights will airlift Pakistani from Canada, United Kingdom, Turkey, Kuala Lumpur, Baku and Tashkent. This plan will be reviewed on daily basis, he said. “It is our big concern to conduct coronavirus tests of all passengers coming from abroad,” he added.

He said that various think tanks can assist the government in organizing the ‘PM’s Corona Relief Tigers’ volunteers and their training in the light of the current crisis. He said a national database containing individual level details of volunteers regarding their qualification, skills and location needs to be automated using a management information system. He stressed the need for a real-time dashboard which can be used to track engagement with communities. This exercise will be important for rapid learning and will also identify any mistakes being committed, he added.