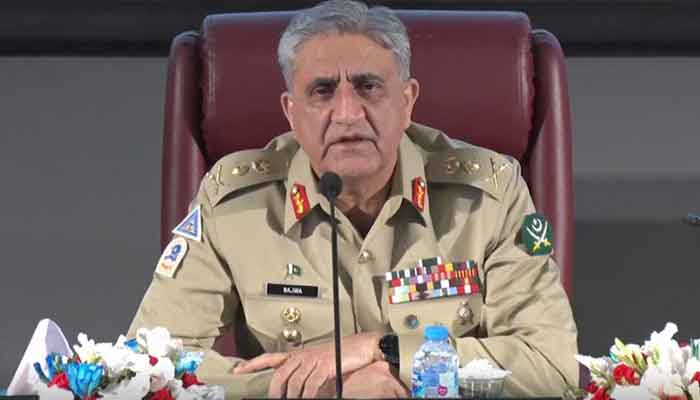 The Supreme Court (SC) Thursday granted six-month extension in the service of Army Chief General Qamar Javed Bajwa after the government gave an undertaking assuring the court of proper legislation within six months specifying the terms and conditions of service of the army chief.

General Qamar Bajwa was set to retire on November 28 on completion of his three-year term; however, the government appointed him as the COAS under Article 243(4)(b) of the Constitution with effect from November 28, 2019.

Earlier, in August Prime Minister Imran Khan extended his tenure through a notification; however, the Supreme Court suspended the notification on November 26.

A three-member bench of the apex court, headed by Chief Justice Asif Saeed Khan Khosa and comprising Justice Mazhar Alam Khan Miankhel and Justice Syed Mansoor Ali Shah, heard a petition challenging the extension. The court held that the appointment [of General Qamar Javed Bajwa as the COAS] will continue for six months subject to legislation, determining his tenure and other terms and conditions.

“Considering that the COAS is responsible for the command, discipline, training, administration, organization and preparedness for war and is the chief executive at the General Headquarters, we, while exercising judicial restraint, find it appropriate to leave the matter to parliament and the federal government to clearly specify the terms and conditions of service of the COAS through an Act of Parliament and to clarify the scope of Article 243 ofthe Constitution in this regard,” the court ruled in its short order announced around 3:45pm in the jam-packed courtroom No 1.

“Therefore, the current appointment of General Qamar Javed Bajwa as COAS shall be subject to the said legislation and shall continue for a period of six months from today, whereafter the new legislation shall determine his tenure and other terms and conditions of service,” the short order further reads.

The court order noted that extension/reappointment of General Qamar Javed Bajwa, Chief of the Army Staff, had been challenged before it.

The court observed that during the case proceedings in the last three days, the federal government had moved from one position to another referring to it as reappointment, limiting retirement or extension of tenure and also interchangeably placed reliance on Article 243(4)(b) of the Constitution of the Islamic Republic of Pakistan, 1973 (“Constitution”) and Regulation 255 of the Army Regulations (Rules), 1998.

The court, however, held that finally the federal government through the Attorney General for Pakistan presented before it a recent summary approved by the president on the advice of the prime minister along with a notification dated 28.11.2019 which showed that General Qamar Javed Bajwa had been appointed as the COAS under Article 243(4)(b) of the Constitution with effect from 28.11.2019.

“We have examined Article 243(4)(b) of the Constitution, the Pakistan Army Act, 1952, Pakistan Army Act Rules, 1954 and Army Regulations (Rules), 1998 and in spite of the assistance rendered by the learned attorney-general, we could not find any provision relating to the tenure of the COAS or of a General and whether the COAS can be reappointed or his term can be extended or his retirement can be limited or suspended under the Constitution or the law,” reads the order.

The court noted that the attorney-general took pains to explain that the answers to these questions were based on the practice being followed in the Pakistan Army but the said practice had not been codified under the law.

“It further provides that the president shall, subject to law, have power to raise and maintain the military, etc. and it is the president who on the advice of the prime minister shall appoint, inter alia, the COAS”, says the short order.

It added that Article 243 of the Constitution, therefore, clearly showed that the president shall, subject to law, raise and maintain the military; however, the laws referred to above do not specify the tenure, retirement, re-appointment and extension of the COAS or of a General of the Pakistan Army.

The court short order further said that the attorney general had categorically assured [the court] that this practice being followed was to be codified under the law and undertook that the federal government shall initiate the process to carry out the necessary legislation in this regard and sought a period of six months for getting the needful done.

After these observations, the court disposed of the petition. Earlier, the government submitted a fresh summary on the reappointment of COAS General Qamar Bajwa.

Thereafter, the court directed the attorney general to give an undertaking that Parliament will pass a legislation in this regard within six months, an amended notification by removing the mention of the court, duration of the tenure of the army chief as well as description of salaries and allowances.

The attorney general along with Law Minister Farogh Nasim appeared before the court and submitted the draft of summary for extension in the tenure General Qamar Bajwa.

The chief justice, however, after going through the said draft took exception to the draft containing the court proceedings. “Don’t bracket us with your actions,” the CJP told the AG asking him further as to why the court’s name was used. The CJP directed the AG to remove the court’s proceeding mentioned therein.

The chief justice further asked the AG to avoid making such errors in future. Due to your errors, the army chief had to join the consultations instead of concentrating on defending the borders,” the CJP told the AG.

The CJP further said a propaganda was launched against the judges as they took up the matter, adding that it was said that the three judges were CIA agents working on Indian agenda. The chief justice further noted that it was mentioned in the fresh summary that the tenure of the COAS will be three years; however, he pointed out that Article 243 of the Constitution had not mentioned the tenure except salary and allowances.

The chief justice asked if tomorrow they found an extraordinary general, will they grant him an extension of 30 years. Addressing the AG, Justice Mansoor Ali Shah said he will have to give some timeframe asking him to comply with Article 243 of the Constitution.

“You have to specify something in the law,” Justice Shah told the AG, adding that there was no better forum but Parliament that could remove the ambiguity.

Justice Mazhar Alam Khan Miankhel observed that it should also be clarified whether in future the tenure would be extended or if there will be a reappointment. At the start of hearing, the court sought the notifications earlier issued for former army chief retired Gen Ashfaq Pervez Kayani’s extension as well as that of retired Gen Raheel Sharif’s retirement. Later on, the attorney general complied with the court’s direction and submitted them to the court.