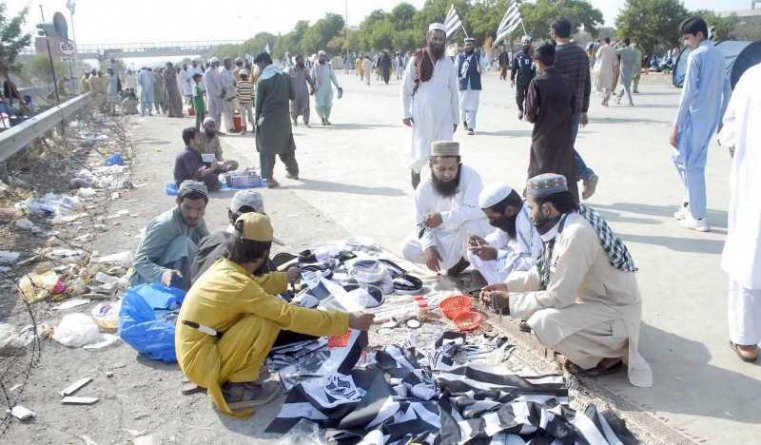 The government is adamant to break the deadlock with opposition as JUI-F continues its sit-in at Islamabad’s H-Ground. The negotiating team is currently holding a meeting with Prime Minister Imran Khan at PM Office. The team, which is being led by Defence Minister Pervaiz Khattak, comprises Senate chairperson, National Assembly speaker, Asad Umar, Chaudhry Pervez Elahi, and Shafqat Mehmood among others.

The premier is being brief about the team’s meeting with the Rahbar Committee and Maulana Fazlur Rehman. JUI-F workers and supporters have been staging a protest near Peshawar Morr with the aim to topple the PTI government. The march started from Karachi last week under the leadership of Maulana Fazlur Rehman. The caravan reached Islamabad on October 31 after making stops in different cities. The march has now turned into a sit-in as the part protesters have asked the state institutions to stop backing the government. On Monday, Fazl asked the Pakistan Muslim League-Nawaz and Pakistan Peoples Party to clear their position on the opposition’s protest against the government.

He called an all parties conference at his house in Islamabad Monday to discuss the future of their protest against the government. “Do you want to get rid of the rulers who came into power by rigging polls,” Fazl questioned. “The history will never forgive the ones who remain in confusion today.” He questioned both the parties whether the JUI-F alone decided to stage the protest. “For God’s sake, do not fool the people. Devise a strategy with sincerity and we’ll be the frontline troops.”

Fazl said that they want Prime Minister Imran Khan to step down at least, or dissolve the assemblies at most. He said bringing a no-confidence motion was not the only constitutional way to send the prime minister home. “Resignation is also a constitutional way,” the JUI-F chief said. “If it is not presented then it would mean that the government is not serious.” He said he had no personal differences with the premier, however, the issue was of national significance. Fazl remarked that fresh polls without election reforms were also not acceptable to them. “Of what good is an election in which a soldier again stands both inside and outside a polling station?”