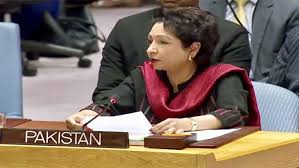 Pakistan’s Permanent Representative to United Nations Maleeha Lodhi on Wednesday has urged to strengthen United Nations Military Observer Mission in India and Pakistan (UNMOGIP), which monitors the Line of Control (LoC) in Kashmir, as revocation of the disputed state’s special status has escalated tensions between both the countries.

In a social media post, Lodhi said, “Speaking in UNSC debate on UN peacekeeping operations, I called for strengthening the UN Military Observer Group in India & Pakistan (UNMOGIP) in the wake of India’s illegal annexation of occupied Jammu and Kashmir on 5 August, in flagrant violation of multiple SC resolutions.”

I also said in Security Council debate on UN peacekeeping operations that the efficacy of UNMOGIP has become more consequential due to mounting ceasefire violations on the Line of Control by Indian forces, which necessitates regular and formal reporting to the Council, she added.

Earlier on Tuesday, Lodhi had urged underscored the urgency of initiating practical steps to deal with the worsening situation in Indian occupied Kashmir, now in its fifth week of a lockdown.

In a meeting with UN Secretary-General Antonio Guterres, the ambassador said that the intensifying tragedy in occupied Kashmir was, in fact, an urgent call to set into motion his initiative of “preventive” diplomacy before the crisis spins out of control.

Tensions between nuclear-armed neighbours India and Pakistan heightened after Narendra Modi led government on August 5 abolished the special status of occupied Kashmir under Article 370 of the Constitution and placed the territory in a state of indefinite curfew.

Pakistan ‘unfairly’ blamed for US failures in Afghanistan:PM Imran Khan

Pakistan 'unfairly' blamed for US failures in Afghanistan:PM Imran Khan