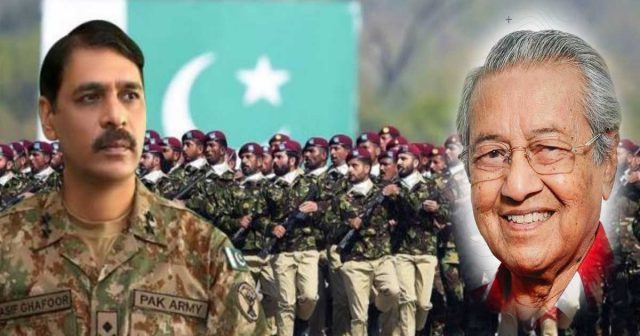 The defence minister of Azerbaijan, chief of air staff Bahrian and government officials from Oman will also attend the parade, according to the Inter Services Public Relations (ISPR).

The joint military parade is an annual feature to mark Pakistan Day on March 23. The day commemorates the passing of the Lahore Resolution on March 23, 1940 when the All India Muslim League demanded a separate nation for Muslims of the British Indian Empire.

Beautification work is underway at the Shakarparian Parade Ground which the Metropolitan Corporation of Islamabad is conducting via a contractor.

Meanwhile, intelligence-based operations have been launched in the capital in preparation for Pakistan Day.

The operations will be conducted jointly by various law enforcement agencies including the Counter Terrorism Force, Special Branch and capital police, a senior police official said, adding that the intelligence wings of these organisations have mounted vigilance across the capital to gather information.

The officer said security measures will be put in place in the capital between March 16 and March 23.

Joint pickets will be established around Parade Ground, Faizabad and roads leading towards it. Joint teams will also conduct patrolling.

The police are issuing an advisory to those involved in the liquefied petroleum gas (LPG) business to take extreme care to avoid gas cylinder blasts. The officer said LPG businesses within a five-kilometre radius of Parade Ground will be shut down till March 23.

Similar advisories regarding LPG cylinders are also being issued to hotels, motels, restaurants and guest houses. The official said the Islamabad Electric Supply Company has also been approached to check transformers in close proximity to the venue and replace faulty ones to avoid power failure.

Separate police teams will be deployed near the Parade Ground to keep an eye on suspicious elements. The officer said the teams will conduct patrolling and take action against those involved in kite and pigeon flying. The teams will also check building rooftops.

Officials of the capital police and administration also met with those of the army and air force to discuss the security plans. A spokesperson for the police said that Inspector General of Police (IGP) Islamabad Mohammad Aamir Zulfiqar Khan directed all police officers to ensure foolproof security arrangements for the Pakistan Day parade.

The IGP is said to have directed that intelligence-based operations should be continued and that hotels, motels, rest houses and madressahs should be checked on a daily basis. Deputy Inspector General (operations) Waqaruddin Syed has already made directions for reviewing security plans for March 23, the spokesperson said.

He added that as per the IGP’s directions, a security survey has been completed and that further efforts are underway to plug any loopholes.

The IGP has given explicit directions to the DIG (operations) for a strict crackdown against kite flying in the capital as well as a fresh campaign against drug and land mafias.

The IGP has directed Senior Superintendent of Police Islamabad Traffic Police Farrukh Rasheed to facilitate common citizens on and before March 23 and he also appealed to citizens to cooperate with the authorities.