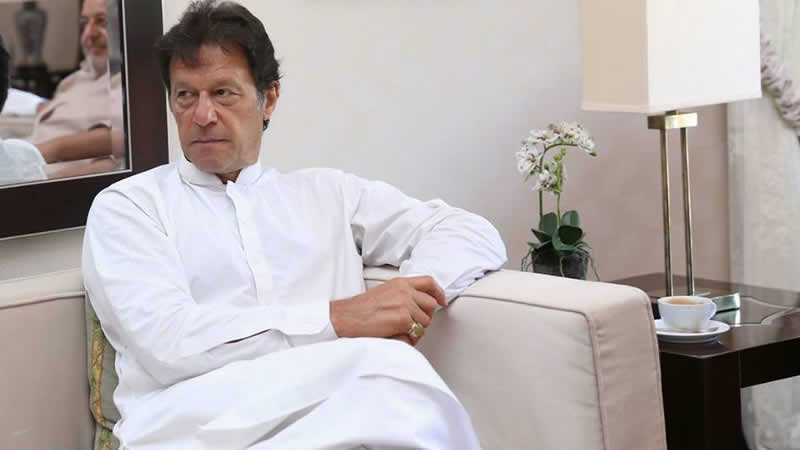 Prime Minster Imran Khan on Monday said that there was no sign of any civil-military discord and his government was enjoying unwavering support of the armed forces.

The manifesto of the Pakistan Tehreek-e-Insaf (PTI) also enjoyed support across the board, said the premier in his first interview after assuming the top office of the country in August. He was interacting with a select group of senior journalists in Islamabad.

On performance of federal ministers in the first 100 days, the premier said he had received progress reports from the federal cabinet, especially on the cost-cutting measures they had taken. “The government will act on these reports … and it might make some changes in the cabinet,” he remarked. The decision of any changes in the cabinet will be made by the next week, he added.

On the issue of missing persons, the prime minister said the army chief had assured him that issue would be resolved soon.

Prime Minister Imran said the government had successfully set the future direction for the accomplishment of its economic and administrative policies under its first 100 days agenda, adding that the effects will soon be felt by the masses.

Assuring the nation, he said that economic indicators would show an upward trajectory and the rupee would start strengthening against the US dollar in the coming days, bringing investment from foreign countries.

Downplaying plummeting of rupee against US dollar, the prime minster said it was a temporary phase that happened due to ‘adjustments’ made by the State Bank of Pakistan and would be over soon. Commenting on his recent statement wherein he had advised the nation to not worry, PM Imran said he only came to know about the sudden jump in dollar’s value through television.

The reason could be demand and supply of the dollar and speculation in the market which added to the rupee’s depreciation, he added. The premier said the government was making efforts to make the institutions autonomous, so that they could take their decisions strictly in accordance with the laws, referring to the step taken by the SBP.

The prime minister said that his government was emulating China’s model to shore up the crippling economy as it had attracted investment by creating export zones. He said the government was also making efforts to plug $10 billion money laundered out of the country every year.

In response to a question regarding his famous statement on ‘chicken and egg economy’, the prime minister said the brunt of poverty was felt in rural areas of the country the most and stressed the need to empower villagers.

The PTI chief interestingly did not rule out possibility of early elections, albeit in a lighter vein, when asked a question in this regard. “Nothing can be ruled out,” he said amid laughter by all present.

On questions related to misuse of power by state ministers, PM Imran Khan said not a single example could be shown where he had interfered in the matters of the state. “If Azam Swati is found guilty he will step down from his post,” said the premier regarding a case in the Supreme Court.

He, however, lamented that the chief justice had referred to ‘nepotism’ in Zulfi Bukhari’s appointment as special assistant on overseas Pakistanis.

PM Imran appointed his close aide Zulfiqar Hussain Bukhari as his special assistant in September. Chief Justice of Pakistan Mian Saqib Nisar remarked during a hearing that “such issues should be run as per the national interests and not on the basis of friendships.”

PM Imran also vowed to rid the nation of corrupt bureaucracy and added that bank account details have been acquired with assistance from foreign countries.

“Some corrupt bureaucrats, who were part of the status quo, have been attempting to sabotage the system, so they could make illegal money again,” he commented on his government’s clashes with a number of high-level officials.

The prime minister said the National Accountability Bureau (NAB) was autonomous and the government had no say in its affairs in any way. “My political opponents have been after us since day one as they fear that their massive corruption will be unmasked,” he remarked.

“We will not grant any national reconciliation ordinance (NRO) to anyone,” PM Imran said. “The country was looted in the past in the name of the Charter of Democracy.”

He refrained from responding when asked if PPP co-chairman Asif Ali Zardari was going to jail, but said he wanted to give all ‘thieves’ as little time as possible.

On the ongoing anti-encroachment drive, the premier said he had explicitly directed the authorities to only go after land grabbers and make sure that houses of poor citizens were not demolished in the process.

The opening of Kartarpur border corridor was a significant decision of the government to defuse tensions between Pakistan and India, said the prime minister, adding that the gurdwara of Baba Guru Nanak had immense sanctity for Sikhs.

Commenting on the foreign policy, PM Imran said, “We want to mediate between Iran and Saudi Arabia to end the war in Yemen.” He reiterated that Pakistan would play its role to end the Afghanistan war.

“I will only go on foreign trips if they are productive for Pakistan,” he remarked.

Remaining persistent with his statement about ‘U-turns’, he said, “I have never denied taking U-turns and I repeat it is a sign of a great leader … a good leader can always change his strategy at any time … sometimes you need to backtrack from an earlier position to reach your destination.”

On a question pertaining to crackdown on Tehreek-e-Labbaik Pakistan (TLP), PM Imran said, “We tried our best to hold talks with the TLP leadership and deal with the situation peacefully but to no avail.” No country in the world would allow anarchy and chaos, he added. – Dawn