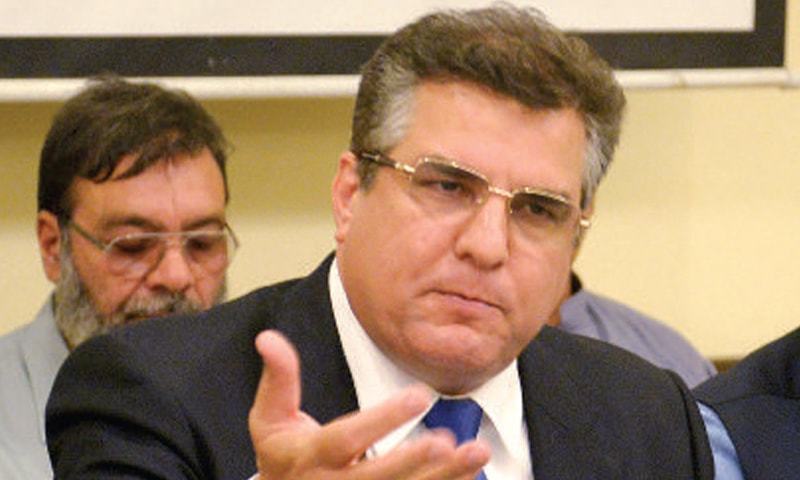 The Supreme Court sentenced on Thursday former federal privatisation minister and Pakistan Muslim League-Nawaz (PML-N) leader Daniyal Aziz for contempt of court “till rising of the court”. The contempt judgment also leads to automatic disqualification from Parliament for five years and thus Aziz will be unable to contest the upcoming general election. A contempt sentence of ’till rising of the court’ means the contemnor avoids jail and is punished symbolically until the bench remains in session.  A three-judge bench of the top court had taken suo motu notice of Aziz’s anti-judiciary remarks in February this year. In its judgment, the court ruled today that Aziz had attempted to malign the court in his media talks and spread hatred in light of Section 2 (b) of Article 204 of the Constitution and found him guilty on the last two of the three charges against him.

The court also ruled that it deliberately showed leniency and did not send Aziz to jail for six months under the law. As the three-member bench, headed by Justice Gulzar Ahmed, convened to announce the verdict, Justice Mushir Alam, who was part of the original bench, was given the verdict for reading out.  Justice Alam, however, decided to wait for Aziz before announcing the verdict as the former minister had not arrived in court.  As Aziz later reached the top court, Justice Alam read out the verdict. Aziz stayed in court till the bench was in session, as per the judgment.  Speaking to the media after the verdict, Aziz said his father will contest the July 25 election from his constituency and he will decide the next legal course of action after a copy of the detailed verdict is received.  Justice Sheikh Azmat Saeed and Justice Mazhar Alam Miankhel, the original head and member of the bench, were not in Islamabad to take part in the hearing.  Strict security measures were in place in and around the top court of the country in light of the verdict.

The apex court had issued a show-cause notice to Aziz on February 19, after a contempt of court notice was sent to him on February 2 over his “controversial speeches and statements made during television shows”. Aziz was indicted on contempt charges by the apex court on March 13. The SC had reserved its decision in the case on May 3 after both sides completed their arguments. Aziz, who vehemently defended in the media former prime minister Nawaz Sharif and his family during the Panama Papers case proceedings last year, has been awarded a Pakistan Muslim League-Nawaz ticket to contest the July 25 general election from NA-77, Narowal-I. At the last hearing of the case on May 3, when the decision was reserved, prosecutor Rana Waqar had argued that Aziz’s remarks were an attack on the system of justice.

Waqar had informed the bench that Aziz had termed ‘scripted’ Pakistan Tehreek-e-Insaf leaders’ Imran Khan’s acquittal and Jahangir Tareen’s disqualification by the apex court and stated that the monitoring judge of the Supreme Court orchestrated the corruption references against Nawaz and his family. “If the court’s authority is eroded that what will be left,” Justice Sheikh, had wondered. During an earlier hearing, Justice Sheikh had assured: “The trial will be transparent as per the Constitution.” The then-minister’s response to the court had stated that being a parliamentarian he could not even think of disrespecting state institutions. The reply further said that Aziz believes in the supremacy of Constitution and respects state institutions, including the judiciary. “Media ran my comments out of context,” the defendant had stated, pleading the court to take back the show-cause notice. This year, the apex court has already sentenced former PML-N senator Nehal Hashmi for contempt and is hearing a similar contempt notice against former state minister Tallal Chaudry.

Daniyal hails from Narowal’s Shakargarh Tehsil and is the son of Anwar Aziz Chaudhry, a veteran politician and former minister.  He has been elected two the National Assembly three times — 1997, 2002 and 2013. After winning in 2002, he joined the Pakistan Muslim League-Q and became the head of the National Reconstruction Bureau.

Careem-TCF Campaign Concludes Positively for the Cause of Education