Govt Revives Plan to Relocate GHQ from Rawalpindi to Islamabad 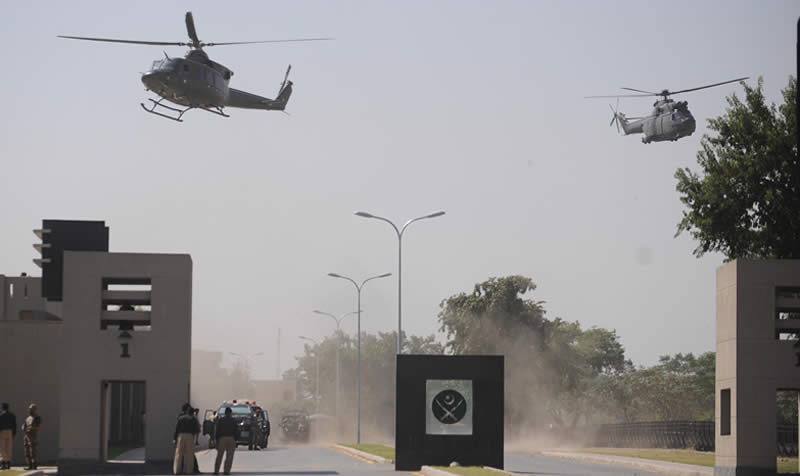 The government has revived its plan to relocate the military headquarters, known as General Headquarters (GHQ), from Rawalpindi to Islamabad, according to Defence Secretary Lt Gen (retd) Zamirul Hassan.

Briefing the Senate Standing Committee on Defence on Thursday, he said that 2,450 acres of land has been allocated for building a defence complex in Islamabad. And for this purpose 5,000 families would be relocated to a different place.

He said the defence complex would be built at a cost of Rs100 billion and the money would be provided by the Pakistan Army, according to Voice of America Urdu.

The plan to relocate the GHQ had been under study since 1970 – and after preliminary work in the last decade, the project hit snags during the tenure of former army chief Gen (retd) Ashfaq Pervaiz Kayani.

The defence secretary said that 2,450 acres of land has been allocated for the defence complex and 5,000 families living there would be relocated.

Moreover, he also said that Pakistan did not have confirm information about the death of Umer Khalid Khurasani, the chief of the outlawed Jamaatul Ahrar faction of the Tehreeke-e-Taliban Pakistan.

Khurasani, whose group has carried out some of the deadliest terrorist attacks in Pakistan, was reportedly killed in a US drone strike in eastern Afghanistan opposite Kurram Agency of Pakistan earlier this month.

According to him, Khurasani’s picture circulated in the media was forged. There has been no US drone strike inside Pakistan in recent days, he claimed.

“Pakistani military has 975 posts along the border, while Afghan security forces have only 218 posts,” he added. “On the other hand, there is no military post along the 650-kilometre-long border between the two countries in Balochistan.”

He further said that there have been 307 terrorist attacks in Pakistan from the Afghan border so far this year.

The defence secretary told the lawmakers that 73 wings of the Frontier Constabulary were being raised for the management of the Pak-Afghan border. “Of these, 29 wings have already been set up.”

He added that the porous border was being fenced at a cost of Rs56 billion.

Briefing the panel on the eastern border, Lt Gen (retd) Zameerul Hassan said that India has violated ceasefire along the Working Boundary and Line of Control 1,299 times so far, this year.

Indian border guards have continuously been targeting civilian population, while on their side of the border Indian authorities were evacuating population in order to create a buffer zone.

Every Child is Gifted

Every Child is Gifted