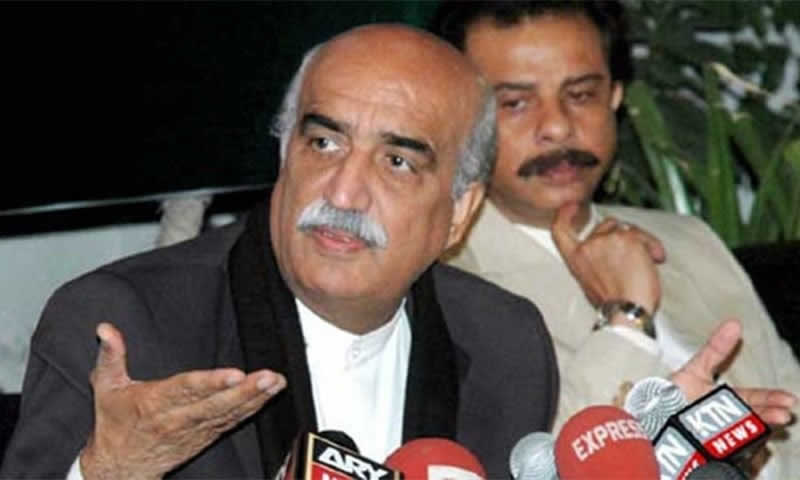 The standoff between the centre and the Sindh government intensified on Monday, with Interior Minister Chaudhry Nisar Ali Khan firing a fresh salvo and accusing the PPP of using politics as a shield to justify its ‘wrongdoing’. “When some institution holds them accountable they term it an attack on Karachi.

Sindh is not under attack by the centre or any institution, but those in hold of land, resources and wealth in the province for years and eating them up like moths,” the minister said in a statement.

What prompted the firestorm was severe criticism by PPP leaders of his statement that the federal government had legal options to keep the Karachi operation going if the Sindh government failed to extend Rangers’ stay in the province. The PPP hit back furiously, with the Leader of the Opposition in the National Assembly, Khursheed Ahmed Shah, accusing the interior minister of deliberately weakening the federation with his untoward remarks against the Sindh government.

Mr Shah said the PPP was avoiding a confrontation with the federal government in the best interest of democracy; otherwise everybody knew about the level of lawlessness and corruption in Punjab. Had the PPP ever demanded deployment of Rangers in Lahore? Without naming the interior minister, Mr Shah quipped: “He hasn’t seen any jail and enjoyed comforts of his home even when his leader, the prime minister, was in jail and Begum Kalsoom Nawaz was fighting against the dictatorship of Gen Pervez Musharraf. Just 15 days in jail and such people start seeing goat in elephant.” About the extension of Rangers powers in Sindh, he said Chief Minister Qaim Ali Shah was waiting for a meeting with Prime Minister Nawaz Sharif on the matter as the latter, before leaving for China, had a brief telephonic conversation with the former. The opposition leader warned the federal government against singling out one province as it would only hurt the federation.

In his statement issued on Monday, Chaudhry Nisar said books could be written on inquiry reports and cases before the courts about their (PPP) acts and deeds, from the Employees Old Age Benefits Institution to the Trade Development Authority and from Sui gas to PIA. “They did not even spare Haj and Umra and Pakistan is perhaps the only country in the world where the worst corruption in Haj and Umra took place during their (PPP) days in power,” he lamented.